The Temple of Ikov is a dungeon in Hemenster. Players do not need to have started the Temple of Ikov quest to enter it, but do need the Pendant of Lucien to gain access to the second part of the dungeon.

It is located north of East Ardougne, just south of the Ranging Guild (see map to the left).

The closest Fairy ring location is BLR. The player may teleport to the Ranging Guild using a combat bracelet. Players who have completed the hard or elite Ardougne achievements can use the cloak to teleport to the farming patch south of the main entrance.

Notable non-player characters within the dungeon are Winelda and the Guardians of Armadyl, who guard the former location of the Staff of Armadyl.

This dungeon is the only place in which ice arrows can be obtained.

To pass to the north portion of the dungeon, the player must be wearing the Pendant of Lucien. 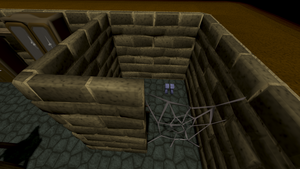 Players can pick up boots of lightness if they slash the spiderweb.

There is a set of stairs at the west end of the first chamber of the dungeon (the first chamber the player enters when using the ladder from the Temple above; refer to the dungeon map to the right). Players will need a light source to move once they've descended the stairs, though the darkness is not dangerous to the player. If the player descends the stairs without a light source, text will appear warning the player, and movement will be limited to only a few spaces to the east of the stairs.

Boots of lightness may be obtained at the far end of this room if the player uses a knife or bladed weapon to slash through the web that blocks the doorway.

This is a great place to fight lesser demons, because there is hardly anyone fighting them here, and it is pretty close to the Seers' Village bank. 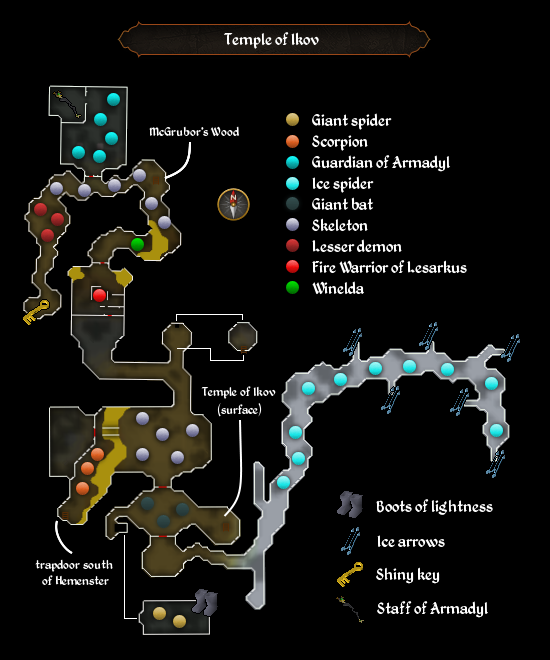