From the RuneScape Wiki, the wiki for all things RuneScape
Jump to: navigation, search
The Old School RuneScape Wiki also has an article on: osrsw:Brine Rat Cavern 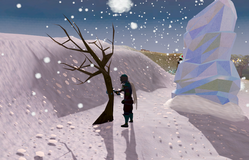 The windswept tree that marks the hidden entrance.

The Brine Rat Cavern is a series of caverns which feature heavily in Olaf's Quest. It can be entered after starting the quest by digging south of the windswept tree with a spade in the inventory. The entrance is located on a plateau east of Olaf Hradson and southeast of the Rellekka Hunter area. After digging the hole, the player will be stunned for a few seconds and emerge in the southwestern section of the cavern. 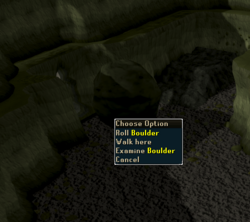 The boulder blocking the cavern's exit.

The exit to the cavern is found in the southwestern corner, blocked by a boulder. Rolling the boulder will expose the exit. After exiting the cavern, the player will emerge slightly north of Olaf with a message stating, "You exit the cave. From this side you can't even make out how to get into the cave! You'll likely need to dig to get back inside." To return to the cavern, simply dig by the windswept tree again.

Inside the cavern[edit | edit source]

The cavern consists of a mixture of interior and exterior areas. The main cavern and the area at the end of the cavern are separated by coastal areas and a slippery walkway. The cavern is home to a few different types of monsters, such as giant bats, found in the passage closest to the entrance, and brine rats, found in a cavern just east of the giant boulder.

Skeleton fremenniks can be found scattered throughout the northern half of the cavern. They hold a key that must be obtained to bypass locked doors further in the caverns. The picture wall that separates the first cavern from the first coastal area is a puzzle door that must be solved during Olaf's Quest. After completing the puzzle it remains open. 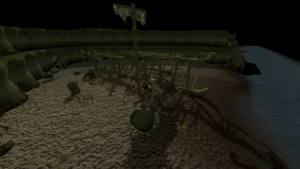 The coastal area to the far north of the cavern contains more skeleton Fremenniks and rock crabs. The eastern coastal area contains rope and rotten barrels and the western side contains a shipwreck formerly captained by Ulfric Longbeard and the captain's grave, just east of the wreck. The two areas are separated by a slippery walkway and a door with multiple locks. Searching the chest in the wreck will cause Ulfric's reanimated skeleton to attack. After he is defeated, the chest can be searched again to loot Ulfric's treasure.

The Brine Rat Cavern is in the north-eastern region of the Fremennik Province. There are multiple ways to travel to the cavern. One of the quickest ways is to use the Fremennik Province lodestone and run northeast. Alternatively, a player may use an ice strykewyrm mask or helm twice a day to teleport into the Ice strykewyrm cave. From there, exit the cave and you will emerge close to the windswept tree. A Fairy ring, code DKS, and the slayer ring teleport will put the player close to the Fremennik Slayer Dungeon, which is just south of the Brine Rat Cavern. In order to enter you must use a spade (the spade in your toolbelt won't work here) and dig just south of the windswept tree.