From the RuneScape Wiki, the wiki for all things RuneScape
Jump to navigation Jump to search
Not to be confused with Zemouregal's fort.

The Chaos Temple Dungeon (also known as Zemouregal's Base) is a dungeon located under the Chaos Temple in a safe version of the Wilderness. It is first accessed through a trapdoor in the Defender of Varrock quest, and requires the Grubby key to enter. After the quest, players may use the dungeon without the key.

Talk to Hartwin in the north-west tower of Varrock Palace and he will teleport you right next to the trapdoor leading into the dungeon. Although it is nominally located at the Chaos Temple in the Wilderness, there is no way to access the dungeon from the true Wilderness, nor any way to return to the Wilderness from the safe area. If you walk to the edge of the safe area, you will be given the option of returning to Varrock Palace.

The entrance to the dungeon is behind (south of) the Chaos altar within the temple. Players must have completed at least part of the Defender of Varrock quest to enter the dungeon. 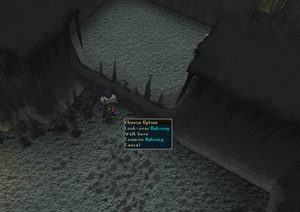 First balcony in the dungeon 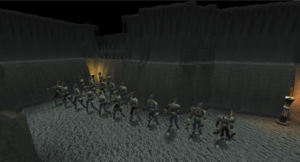 Second balcony in the dungeon

Note: Parts of this dungeon cannot be accessed.

Aggressive Armoured zombies roam throughout the dungeon and attack using Melee or Ranged. Balconies are used during the Defender of Varrock quest for cutscenes, but only on your first viewing. Following the dungeon from the ladder toward the north-west players will approach a door surrounded by empty bottles which are used to collect red mist. To unlock the first and second door in the dungeon, three bottles must be filled with the red mist released by killing armoured zombies and used on the doors. During the quest, a cutscene will also follow entry of the South Western chamber once the first door is unlocked. Once these doors have been opened red mist will no longer be necessary to pass.

Following the path through the second red mist door to the north-east will lead to another locked door. However, this door requires the base key found during The Curse of Arrav. Examining this door reveals: "Leads into the depths of Zemouregal's base". Past this door is a dead-end path with human detection traps surrounding a locked door. To continue, the player must instead enter the kitchen and travel through the sewer pipe deeper into the dungeon. To initially enter the sewer pipes, players must wear Insulated boots. Following the sewer to the next entrance will require using a summoned Macaw's remote view ability on it. Upon trying to enter the second sewer pipe without using the Macaw's remote view ability on it the player will refuse on the chance a guard may be on the other side.

Once the player has reached the other side of the sewer, they must proceed South into the Chest room. Within this room is a chest containing a code key (level 66 Thieving required), some decoder strips, and Zemouregal's Notes (part 2) on the tables. North of this room and east of the sewer exit lies the Heart room. Prior to stealing Arrav's heart from this room, it is found on the pedestal. However, the heart is protected by a complex code lock, three fire traps (which are avoided by grappling your way over them), and a strong spell. 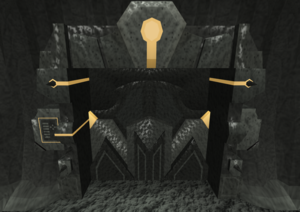 The dungeon plays a major role in two quests and a smaller role in one miniquest: