From the RuneScape Wiki, the wiki for all things RuneScape
Jump to navigation Jump to search
"LRC" redirects here. For the monsters of the Living Rock Caverns, see living rock creature.

The official world for Living Rock Caverns is world 83 (P2P).

The Living Rock Caverns is a members-only area that was added on 17 September 2009. The area was designed for players with high levels in Fishing and Mining.

There are no quest or skill requirements necessary to enter this area. However, it is a dangerous area, as aggressive level 92 living rock creatures guard the resources, so training skills here may very well be interrupted regularly and dangerous. Wearing the magic golem outfit or fury shark outfit (or any of the component shark sets) will cause the creatures to be tolerant.

For players who have low combat levels or plan to spend a long time in the cavern, it may be advised to train with other players on the official Living Rock Cavern world, world 83.

The Living Rock Caverns are found below the Dwarven Mines beneath Ice Mountain, near Falador. Defensive armour is recommended for players who do not own a magic golem outfit, fury shark outfit, or any of the component outfits, as the living rock creatures are aggressive and high-levelled. There are several main ways to get there:

The image on the RuneScape home page on the day of its release.

In the central part of the cavern, Farli has set up camp. There is also a handy pulley lift. Players can use this device to deposit items directly into their bank, kind of like a deposit box. Players can deposit all of an item quickly by using an item with Farli's lift and pressing the 'all' option in the chatbox or four on their keyboard.

Mining in the Living Rock Caverns requires levels 70, 73, and 80 Mining for concentrated coal deposits, living rock remains, and concentrated gold deposits, respectively. The concentrated gold and coal deposits are special rocks that yield five ores at a time or ten if using the corresponding stone spirits. Prior to the Mining & Smithing rework, deposits would collapse, making it temporarily impossible to mine from it and forcing players to move to another deposit. This no longer happens, and a single deposit can be mined for as long as desired. 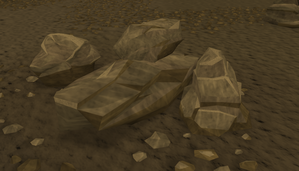 A collapsed mineral deposit, prior to the Mining & Smithing rework.

The official world for mining here is world 83. This can be useful for avoiding taking too much damage from the various creatures that live in the dungeon, especially for lower level players. However, the large number of players moving about can make the world unplayable for those with lower-end bandwidth due to lag and game stuttering. Mining with graphics at Minimum or Low settings is advisable (see Graphic options).

A safe-spot can also be utilised at the southernmost gold deposit by standing against the eastern side of the rock against the wall. 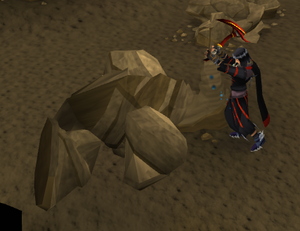 Other "rocks" found in the cavern are the remains of the living rock creatures. These are found directly after killing creatures. The remains are minable by the player who killed the creature immediately and by other players after a one minute delay. The remains contain between five and 20 living minerals, which are used as bait for fishing rocktails.

Two types of fish can be caught in the Living Rock Caverns: cavefish and rocktail. Attempting to cook raw food on Farli's spit-roast yields the message: It would be a bit rude to do that while Farli is cooking here.

Cavefish require a fishing level of 85 and give 300 Fishing experience per catch using a fishing rod (in the inventory or tool belt) and fishing bait (unless the tier 1 prawnbroker perk for baitless fishing has been unlocked). Cavefish heal 2,200 life points each (up to a player's maximum life points) and give a +2 boost to either Attack, Strength, Defence, Ranged, or Magic. Cavefish require a Cooking level of 88 to cook for 214 Cooking experience.

Rocktail require a fishing level of 90 and gives 380 Fishing experience per catch using a fishing rod (in the inventory or tool belt) and living minerals. Rocktails heal 2,300 life points and can heal up to 10% higher than a player's maximum life points, making it among the best single-bite foods in the game. Rocktail requires a Cooking level of 93 to cook for 225 Cooking experience. Eating the fish raw using the Bunyip's Swallow Whole scroll does not currently give the special bonuses.

Cooked Rocktail are an ingredient in rocktail soup and powerburst of vitality.

The caverns are home to the living rock creatures. The caverns are populated with living rock protectors and living rock strikers, both level 92 monsters who use melee, along with ranged for the latter. They can be assigned as a potential slayer assignment by Kuradal. In addition, a level 95 living rock patriarch spawns erratically every two hours, which can be killed for a small range of guaranteed loot.