From the RuneScape Wiki, the wiki for all things RuneScape
Jump to navigation Jump to search
The Old School RuneScape Wiki also has an article on: osrsw:Barrows
This article is about the minigame. For the set of armour and weapons, see Barrows equipment.
For its sequel, see Barrows: Rise of the Six.

The official world for Barrows is world 15 (P2P).

The Barrows is an area-based combat minigame. It involves defeating the six Barrows brothers, each with their own special strengths and weaknesses. Completion of Ritual of the Mahjarrat and Kindred Spirits adds two additional members to the group - Akrisae the Doomed and Linza the Disgraced respectively.

Obtaining all unique drops will unlock the Graverobber [Name] title.

The entrance to the Barrows

The Barrows brothers were ancient warriors of Saradomin who established a reputation of near invincibility while fighting in the God Wars. Originally, Torag wanted to sign up for the crusades, but Guthan persuaded all of his brothers to join after an incident where he killed Commander Jaycliff in a drunken fit of rage after Ahrim killed his lover Isolde, having believed her to left him. Fearful that he would be killed in the subsequent investigation, he went to the Zarosian Mahjarrat Sliske for protection, who required all of them to join. As the brothers left, Sliske gave them special equipment and superhuman strength.

They launched a massive attack to liberate Morytania from the clutches of Lord Lowerniel Vergidiyad Drakan and his vampyres, after he had established complete control over the continent as of the Fall of Hallowvale.

As the brothers and their accompanying army progressed further into enemy territory in Morytania, Sliske followed them until the brothers became weakened. The brothers were grievously wounded in battle near the Great Vyrewall, and thus the army set up camp just west of Meiyerditch. Soon, the brothers died of their infected wounds simultaneously in the army's camp. The army spent several days and nights holding off the attacking vampyres to construct burial mounds, the Barrows, to honour the fallen brothers. The army quickly retreated from Morytania, realising they could never succeed without their former leaders' prowess. 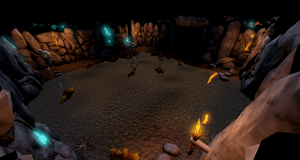 Dare you traverse the maze?

As the army began its return, Sliske cast a magical spell on the crypts, corrupting the bodies of the brothers, turning them into his newest wights, and binding them to guard a very powerful artefact. Sliske's ally Azzanadra had requested for this icon to be guarded before the latter's imprisonment in Jaldraocht Pyramid, so that it could later be used to re-establish contact with the banished Zaros. Sliske, instead of directly taking the Barrows Brothers, decided it would be fun to have them almost succeed in their goal before claiming them, a typical characteristic of the Mahjarrat.

In 169 of the Fifth Age, Azzanadra was released, and, with the help of an adventurer who managed to steal the Barrows Icon from the brothers, re-established communication with Zaros in time for the Mahjarrat Ritual of Rejuvenation. Shortly after said ritual, which the adventurer attends with several Temple Knight allies, Sliske attempted to claim them in a similar way. However, the Saradominist priest Akrisae Kolluym intercepted the spell, sacrificing himself and turning him into Akrisae the Doomed - the seventh wight. Sliske was disappointed that he did not claim what he wanted, but was content enough with a new wight.

In Year 4 of the Sixth Age, Sliske, woefully bored of the inaction by the gods despite his game, decided to kidnap the World Guardian, Meg, Major Mary Rancour, Linza and Brother Samwell in a twisted game with the Barrows brothers to reveal the misdeeds they had performed during their lives. To ensure the World Guardian would play, he killed Samwell. However, he had failed to anticipate the World Guardian's snooping, causing them to discover various secrets that caused him to snap, where he revealed that Linza had stolen orikalkum smithing secrets and ore from the Dragonkin and had come to him for protection. Deciding that enough damage had been done, he broke his contract with Linza and turned her into a wight on the spot, but the World Guardian had destroyed a device that weakened his control over the others. After escaping from his lair, Dharok promised to them that he and the others would help when the time was right.

Soon after, Sliske decided to host his endgame by gathering all the gods for a finale to claim the Stone of Jas. After Kerapac destroyed it, Sliske tried to sic the brothers on the World Guardian, but they had broken completely free of his control. He sent Linza alongside Nomad and Gregorovic, but all three were defeated. After the World Guardian slew Sliske, his control over all of the brothers (and sister) were completely gone. However, his magic still remained, causing them to remain as undead wights. The newly-freed group decided to remain in their mounds, providing their services when necessary and allowed the World Guardian to return and train with them if they desired.

A crumbling tome, obtained by searching the hut near the mounds or by talking to the Strange Old Man found digging the crypts, provides a detailed account of how the brothers came to be buried.

After the release of the new website and interfaces on 22 November 2011, a screenshot was shown on the media page of a graphical update for the Barrows minigame. The January 2012 Behind the Scenes article confirmed that an update was coming to the minigame, which was introduced on the 4 January update.

The graphical update changed the looks of the area, added mist to the crypt, changed the Barrows brothers from purple ghosts to corporeal foes, and, for a week following the release, gave a 1 in 10 chance of doubling rewards. This extra reward chance ended on 11 January 2012.

The objective of the Barrows minigame is to defeat the six Barrows brothers: Ahrim the Blighted, Dharok the Wretched, Guthan the Infested, Karil the Tainted, Torag the Corrupted, Verac the Defiled. Upon completion of Ritual of the Mahjarrat and Kindred Spirits respectively, Akrisae the Doomed and Linza the Disgraced are added into the fray. In this case, Akrisae will share his sarcophagi with Verac and Linza with Ahrim respectively.

The group are fairly strong for their level, being able to utilise their set effects much like a player would when they use their full set. Linza is a unique exception, being significantly stronger than the rest of the group with higher combat stats and health.

Killing all six of the original brothers is required to increase the beast tab kill count and thus also required to reap a soul when on a Soul Reaper assignment.

The very basic strategy of the minigame is as follows:

For more advanced strategy and details on the weaknesses of each brother, see:

The previous understanding of how the loot mechanics work based on a blog post from Mod Timbo is no longer accurate due to a patch on December 4th 2017. [1] The rewards system is outlined below: 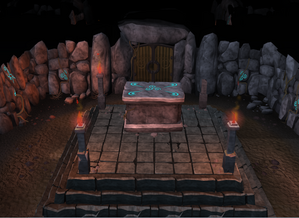 The chest that has your rewards in it

If the brother whose tomb was used to enter the tunnel is not killed yet, he will appear when the chest is opened.

Whether or not you kill Linza has no impact in any way on the drop mechanics besides having her own independent reward slot, as well as calculating reward potential. Reward potential is defined as a specific number that is equal to the sum of the combat level of all your defeated opponents in the completed run (which includes Linza, the brothers in the crypts, the brother in the tunnels, and random creatures in the tunnels), as well as twice the number of brothers killed.

be the number of brothers killed (excluding Linza the Disgraced), the number of regular reward rolls for the chest can be expressed with

.[1] If Barrows items are rolled successfully, they are chosen only out of the killed wights' items. It is possible to obtain multiple pieces of Barrows equipment from a single chest.

With the completion of the hard Morytania achievements, the chest will function like a bank coffer similar to the Queen Black Dragon in that the items can be sent straight to the bank, taken or abandoned. Note that the message The chest is now empty. should appear before teleporting or the rewards will be lost.

If Linza the Disgraced was killed, a one-time roll is performed for her drop table, rolled independently of the other table. There is a 1 in 192 chance to obtain one of her items. [2][3] Therefore there is a 1 in 960 chance for a specific item. This roll on the loot table is only affected by whether or not Linza is killed during the player's run. If the initial 1 in 192 roll fails, nothing else happens and this reward slot is left empty.

Having tier 2 luck or higher will affect one's chance at obtaining barrows pieces as well as the amulet of forsaken.[6]

Due to the math involved, it is always better to kill all 7 brothers (again, excluding Linza) even if they are only interested in certain sets or items in particular. The increased number of reward rolls and the increased chance to hit the rare equipment table far outweigh the chance of getting items from an undesired brother.

This loot table is rolled once per chest, and only if Linza the Disgraced was killed. The chance of getting a roll on Linza's unique table is 1 in 192. If the roll is successful, there is an equal chance of getting any item, making it 1 in 960 for a specific item. It is possible to obtain other Barrows equipment alongside Linza's.

Whether or not you kill Linza the Disgraced[1] has no impact when rolling for other Barrows equipment. Only the items of the brothers that were killed are available to be rewarded.

These items are rolled for separately upon failing the barrows equipment roll.

This table is only rolled if the above rolls failed. If the Barrows totem, corruption sigil, and amulet of the forsaken rolls fail, the drop is affected by the reward potential: A random number between 0 and

is the total level of opponents killed, with a maximum value of 1014.[1]

Completion of the hard Morytania achievements will double the rune drops from the chest.

This drop table is accessed by having a luck modification from ring of wealth or above, and is rolled as an extra reward in respect to the above. There is a 1/10 chance to not obtain a reward even if the table is rolled.[1]

This drop table is seemingly not affected by the above drop tables.

Rise of the Six[edit | edit source]

Barrows: Rise of the Six is a hard mode variant of Barrows, with players fighting the newly empowered Barrows Brothers. In return for a harder fight (up to four players may battle them), players will find themselves greatly rewarded upon defeating them.