The Chaos Dwarf lava flow mine.

The Red Axe base (also known as the Red Axe stronghold) is the Red Axe's secret HQ hidden in the Keldagrim mines. It was built when Hreidmar, the director of the Red Axe, began to form an army of chaos dwarves to conquer the Dwarven city of Keldagrim. The base was later turned into a chaos dwarf city (known as Chaos Keldagrim or Hreidagrim) because Hreidmar's plans to conquer Keldagrim were scuttled.

The base was presumably established by Hreidmar after his previous base was discovered for a second time by an adventurer during Forgettable Tale of a Drunken Dwarf. Although the adventurer's memory was wiped by his Ogre shaman, Grunsh, he presumably decided it too big of a risk to remain there.

Some time later, Commander Veldaban and his "lady friend" Hilda discover the base while investigating kidnappings in Keldagrim East, and they are discovered, causing Hilda to be turned into a Chaos Dwarf and Veldaban's memory to be wiped after being briefly trapped in the base's office. 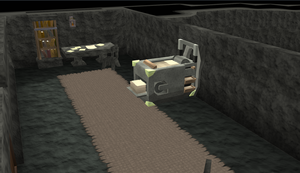 During Forgiveness of a Chaos Dwarf, Veldaban and the adventurer access the base through a cave in the Keldagrim south-west mine, after going through what would become the Chaos Dwarf Battlefield and a large chasm full of mine-cart tracks, similar to what was used in the old Red Axe Base, which also contains a prison. They enter the chamber where dwarves are turned into Chaos Dwarves, and witness Brunolt being turned into a Chaos dwarf. Hreidmar and Grimsson then spot them, and they hide themselves in a room full of Grand Exchange order lists that the Red Axe are using to buy items from the Grand Exchange to use them to conquer Keldagrim. Veldaban then remembers that he had visited the base earlier with Hilda, but had his memory wiped. Using items Hilda had ordered while they were trapped in the office earlier, they escape via another mine cart. Although they tell the Consortium what occurred, they decide not to attack the stronghold as they do not have the resources, and 'noone important' was kidnapped. Nevertheless, they send an army of Black guard to the entrance to the stronghold in order to prevent Chaos Dwarves attacking the city through it.

During King of the Dwarves, Hreidmar sends an army of Chaos dwarves and Chaos dwogres out of the base through an exit in the Barendir caverns, and due to an alliance between the dwarves and the trolls, the attack is repelled, although the base is still strongly defended.

During Birthright of the Dwarves, the now King Veldaban decides to attack the Red Axe base to put an end to the Chaos dwarf menace once and for all. He, the adventurer, an army of Trolls and the Black Guard enter the base through the tunnel in Barendir and arrive in the Chaos Dwarf Lava Flow Mine, Hreidmar's imitation of the main Lava Flow Mine. Grimsson quickly lowers the bridges in the mine, impeding the progress of Veldaban's army, although the adventurer and Veldaban are able to reach him nevertheless and reactivate the bridges, allowing the army to once again gain entry to the mines, and causing Grimsson to flee on a mine cart. 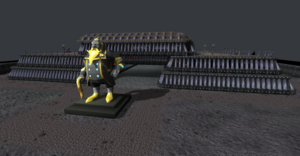 He is quickly pursued by Veldaban and the adventurer, and they arrive back in the Chaos Dwarf conversion chamber. After failing to wipe Veldaban's memories via Grunsh, Hreidmar and Grimsson retreat to Hreidmar's Palace, a warped version of Keldagrim Palace that Hreidmar has filled with Red Axe directors and Chaos dwarf traders. The final fight between, and eventually they are defeated, with Veldaban's army reaching the city soon after, who soon pull down Hreidmar's statue of himself.

Going through the cave after the quest leads to a room full of the Red Axe's discarded Chaos Giants. These monsters were experiments Hreidmar created, but were uncontrollable and were locked up. They presumably escaped after the assault on the base.

This information has been compiled as part of the update history project. Some updates may not be included - see here for how to help out!
Retrieved from ‘https://runescape.wiki/w/Red_Axe_base?oldid=35688523’
Categories:
Hidden category: