From the RuneScape Wiki, the wiki for all things RuneScape
Jump to: navigation, search
The Old School RuneScape Wiki also has an article on: osrsw:Gnome Village Dungeon 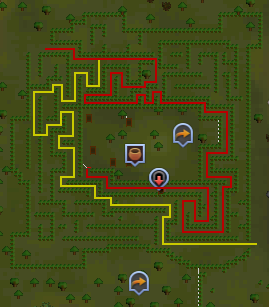 The entrance to the dungeon is marked with

The Gnome Village Dungeon is beneath the Tree Gnome Village. Its surface entrance is in the maze just south of the main village area.

The dungeon features in several quests, as it is the source of Glarial's pebble which is needed in some quests. Players occasionally train on the Hobgoblins found in this dungeon.

Most of the time, Golrie will be in the cell in the north-west. To talk to him, you will need the key to his cell, which is in the crate in the north-east chamber. Once you've freed him, in one quest you will find him outside the cell with the hobgoblins that were guarding him locked up. Later, the hobgoblins will again be outside with Golrie locked in the cell.

The main chamber has large and small monoliths, which the player must occasionally push aside to reach portions of the chamber. There are several chests here which hold items used in The Path of Glouphrie quest. The mahogany chest near the centre of the chamber contains the strongroom key which unlocks Yewnock's strongroom to the west. The mahogany chest itself is locked and must be opened with a key found in one of the other chests.

This chamber also contains a singing bowl, which can be used to make a Crystal chime from a Crystal saw or a Small crystal seed. (This bowl cannot make a crystal saw, use the singing bowl in Brimstail's cave in the Tree Gnome Stronghold.)

Yewnock's cave in the Gnome Village Dungeon is only accessible during and after The Path of Glouphrie quest.