From the RuneScape Wiki, the wiki for all things RuneScape
Jump to navigation Jump to search
The Old School RuneScape Wiki also has an article on: osrsw:Rogues' Den
This article is about the location. For the removed minigame, see Rogues' Den (minigame).

The Rogues' Den is located in south-west Taverley. There is a trapdoor inside The Pick and Lute bar at the north-east corner that gives access to the den. A player needs to have level 75 Thieving and Agility and level 50 Herblore to access the Flash Powder Factory within the Den.

The entrance to the Rogues' Den.

The Pick and Lute, with the entrance to the Rogues' Den, is near the centre of Taverley.

The highlight of the den is the Flash Powder Factory minigame. This game can reward players with Agility, Thieving and Herblore experience, as well as rogue kits, rogue equipment, factory outfit, and the botanist's outfit.

Four wall safes are in the centre of the den. Players can try to crack the safes. Success means they receive 70 thieving experience and also randomly get an uncut gem (sapphire to ruby) or gold coins (10, 20, 40 or 50 coins). Failure means they trigger a trap and take a small amount of damage. Stethoscopes, which Martin Thwait sells, help with cracking the safes. When cracking safes with no failures, around 1500 experience can be earned per minute resulting in 90,000 experience per hour, but this rate should be significantly lowered by failures. Also, one cracking attempt often takes longer. Players with a high Thieving level may get up to 350,000 coins per hour using this method with a stethoscope.

Lower the camera angle all the way down and face north (or reverse for opposite side). Also turn on sound effects. Then you can click without moving the mouse and simply listen for when you need to click again. Many players summon magpies (47 Summoning required) as they will forage gems and rings for you while playing. If you trigger a trap, you can right-click the floor and press "Search Floor". It will disarm the trap for a few seconds but will drain 1 thieving point.

A perpetual fire is located near Emerald Benedict. This makes the den a favoured spot for some players who train Cooking, as it allows rapid cooking and banking of the food. Note that only some food can be cooked using a fire, meaning that items requiring a range must be cooked elsewhere. It should be noted that this fire does not provide the same experience bonus as player-made bonfires do, and as such it is recommended that players instead cook their food on bonfires made close to a bank. 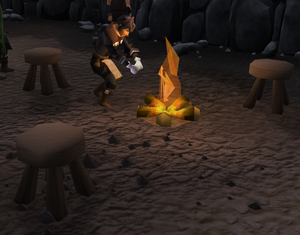 The perpetual fire in use.