Watchtower is a quest about the conflict between Yanille and the ogres of Gu'Tanoth. It involves the restoration of the city's Watchtower so that it may defend itself against an ogre attack.

The Wizards of the Yanille Watch Tower have been reporting increased ogre sightings recently. Use a wide variety of your skills to help the wizards recover their stolen power crystals and stop the advance of the ogre hordes! 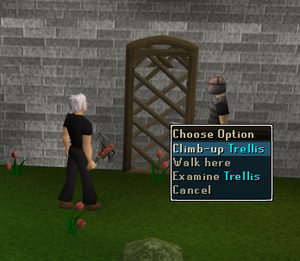 The trellis players need to climb.

To begin, head to the Yanille watchtower, located on the north-west border of the city. Since the guards have been ordered to keep outsiders from entering the tower, you must scale up the trellis on the northern side of the building to access it.

Once at the top, speak to the Watchtower Wizard; seeming alarmed, he tells you that the watchtower cannot currently protect the city from the aggressive southern ogres, as the power crystals that hold the power to ward off the creatures have been stolen. Offer to help, and he'll suggest you investigate the area around the tower for clues.

Due to you taking part in the ongoing investigation, the wizards will now allow the watchtower guards to let you climb up the ladder. 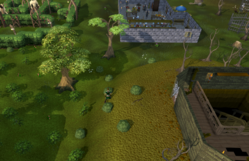 A player searching the bushes

You should take the lit candle from the ground floor[UK]1st floor[US] of the watchtower, if you did not bring a light source. Search the bushes that are a stark contrast from the others, until you find some fingernails.

Other items obtained include an old robe, a damaged dagger, unusual armour and a tattered eye patch, though these items have no apparent use and are not necessary for the quest.

Go back inside the watchtower and show the gathered items to the wizard. Examining the nails, he deduces that they are from a race of humanoids known as skavids, who live in dark caves and serve the ogres. The wizard asks you to retrieve the power crystals from the skavids, and mentions that you should first obtain a map of the skavid caves; their masters, the ogres, might be in possession of one.

You need to now gain access to the ogre city, Gu'Tanoth, to obtain a map for the skavid caves. To enter, you need to help three ogres – Og, Grew and Toban – in exchange for pieces of an ogre relic, which you must give to Gu'Tanoth's gate guards to prove that you're a friend to the ogres.

Head north-west from the Yanille lodestone to find a tribe of ogres. Talk to Og to learn that his nemesis, Toban, has stolen a bar of gold from him; if you agree to help, Og gives you a key to Toban's chest. Only the gold bar from Toban's chest will work; you still need a separate gold bar for later on in the quest.

But before you head to Toban, stop by at Grew's island.

Items needed: Rope (destroyed on use)

South of Og's tribe, you should see an island with an ogre tribe on it. Find a long-branched tree on the west side of the lake and use a rope on the long branch. Talk to Grew, who tells you to teach his enemy, Gorad, a lesson by knocking one of his teeth out.

Take some jangerberries while you're at it as you'll need them later in the quest. Take two in case you accidentally eat one.

Toban's island is between Yanille and Feldip Hills, but the only way to reach it is via the tunnel south-west of Gu'Tanoth. If you do not have a death rune, a death rune spawns in the south-western part of the Feldip Hills (directly south of the tunnel). The wolves and ogres around that area are aggressive, though.

Head to the tunnel entrance and go through it to reach the island. Once there, unlock the chest and take the gold. On the island, you can also find a level 53 chieftain named Gorad; tell him that you have come to knock out his teeth. When he attacks you, kill him to get a tooth as proof for Grew.

Finally, speak to Toban, who agrees to barter the third piece of the relic for some dragon bones. Use the dragon bones on Toban to give them to him. Before leaving, grab the rope that spawns on the island, as you need another one to get back to Grew.

Trade the tooth with Grew for the second piece of the relic, as well as a power crystal, and the gold with Og for the first piece of the relic. If you lose this crystal at any point you can return and get a new one from Grew. 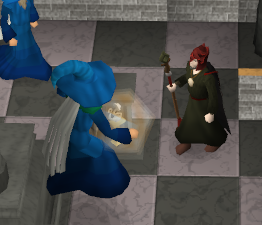 Combining the parts of the Statue of Dalgroth

Once you have all three parts of the Ogre relic, take them to the Watchtower wizard to get them assembled. By now, Grew will have already given you the first crystal. Keep it safely in your bank or inventory until you finish the quest. You do not need to use the crystals until near the very end of the quest.

After you have the full relic, head south to Gu'Tanoth and walk over to the guards (on the western side) on the path into the city. Use the ogre relic on one of the guards at the westernmost gate to gain access to the city. If you try to talk to the guards or enter Gu'Tanoth without giving the guards the relic they will hit you for an amount of your life points and knock you down the hill.

Once you're inside, go a bit south and then east into the market, which is the central area of the city. Find a stall in the southern market with food on it, marked with

on the map, then steal 1-2 rock cakes – an extra in case you accidentally eat one.

Location of the city guards that give the skavid map

Go back on the main path and follow it south to find two more guards. They will ask for some food from the market before they let you across the bridge. Give them your rock cake. Continue onward until you find two more guards. Try to jump over the hole in the bridge, and when you try, the guards will stop you. Pay them 20 coins to jump the hole in the bridge. You need at least 25 Agility to do this; if you do not have the requirements, the ogre guards will say, "Come back when you've got the moves!" When on the next platform, do not open the chest, as it contains a poisonous spider.

You will find several City Guards. If you talk to them, they'll give you a word puzzle. The answer to the puzzle is "death rune". Give one of the guards the death rune and he will give you a Skavid map.

Items needed: Skavid map, a light source, a pair of armoured gloves, and a gold bar. 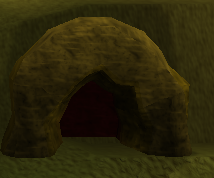 The caves the skavid are hiding in
Skavid caves entrance locations

The Skavid caves are a series of caves located beneath the ogre city. You need the skavid map and a light source to get in. First, enter the cave on the eastern border of the city (4), and talk to the Scared skavid. Promise not to hurt him, and he will teach you the basics of the Skavid language. Then, enter the rest of the caves, all outside the city fence, starting from North (1, 2, 3, 5) and talk to each of the skavids (see below). If it says that they understood you, then you can move on to the next cave.

First go to the cave (1) directly north of the Summoning obelisk.

Pick two cave nightshades from the plants in the room before you leave, as you will need them later on. You need your gloves equipped to do this; attempting to pick the nightshade without gloves equipped will result in you taking a small amount of poison damage.

Then head south-east along the path until you reach the second cave (2).

Head south then to the last cave (5).

After you've done all of them, go back to the cave (4) with the Scared skavid. The skavid will tell you that you're ready to take on the Mad skavids. 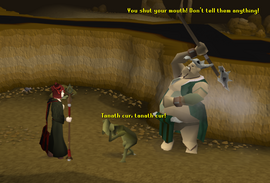 A shaman threatens a skavid.

Go south of the entrance to the Scared skavid cave until you reach a gate. Use your gold bar on an ogre guard, and they will let you through. Enter the cave (6). Talk to the Mad skavid.

He will then give you the second crystal and remark that the others are kept by the shamans in the Ogre Enclave. Enter the nearby hole to end up back in Yanille. Return to the Watchtower Wizard for advice. He will explain that you can distract the enclave guards using cave nightshades.

Note: Although the enclave contains Blue dragons, none of them are aggressive. However, the Greater Demon is, and lower-levelled players should quickly run past it.

Go to the ogre marketplace and use the cave nightshade on one of the enclave guards to distract them, while entering the Ogre Enclave. Make sure to continue through the whole conversation after using the nightshade on the guard, or else it will not work. After entering the enclave, you'll see a short cutscene where an unfortunate dragon is killed by an ogre shaman.

Run past the monsters and exit the enclave from the opposite side of the cave entrance. Do not attack or talk to the ogre shamans, as this will cause them to retaliate with a powerful magic spell, dealing 2000–4500 points of unblockable damage. 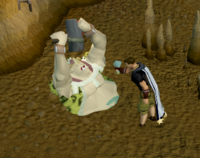 Exit the enclave and return to the watchtower. Talk to the Watchtower Wizard, who tells you that you must make a potion to destroy the shamans. You will only need one potion for this. 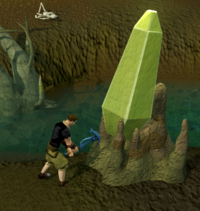 Mining the Rock of Dalgroth

To make the potion, add a clean guam to a vial of water to create a Guam potion (unf). Add some jangerberries to get a vial of jangerberries and guam. Grind one set of bat bones and add the ground bat bones to finish the potion. Give the mixture to the Watchtower Wizard to enchant it into a Magic ogre potion. Doing any of these steps out of order will cause the potion to explode.

Return to the ogre marketplace in Gu'Tanoth and use the second cave nightshade to distract the guards again, and then enter the cave. Just like the first time, make sure to continue through the whole conversation after using the nightshade on the guard.

Use the potion on the six ogre shamans to defeat them all; do not attack them or you'll lose a lot of health. Killing the last will give you the third crystal. The shamans do not respawn after being killed. If you lose this crystal, you will need to search the old robe on the south-east side of the enclave to recover it.

To get the fourth power crystal, find the Rock of Dalgroth on the peninsula extending into the central lake from the western side of the enclave. Mine the rock to get the fourth crystal.

Back in action[edit | edit source] 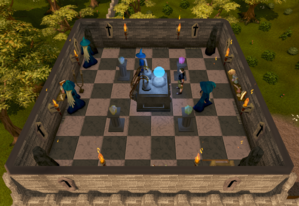 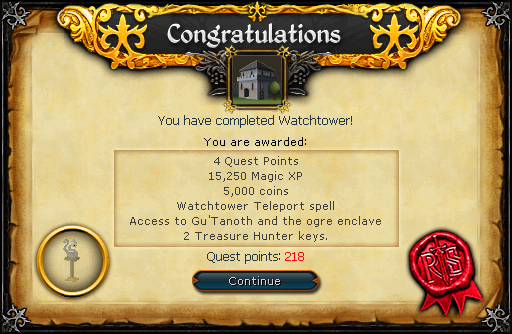 Watchtower is directly required for the following quests/miniquests: