From the RuneScape Wiki, the wiki for all things RuneScape
Jump to navigation Jump to search
Not to be confused with Exiled Kalphite Hive.

The Kalphite Hive is the home of the Kalphite Queen, as well as various other types of Kalphites. It is located north of the Bedabin Camp, in the Kharidian Desert.

Fairy ring BIQ is quite near the surface entrance to the hive. When travelling through the desert, players should have a water source (like Waterskins) and perhaps wear Desert clothing, to protect against the effects of Desert heat.

Players will need a rope to enter the hive from the surface the first time they come, and another to enter the area containing the Kalphite Queen. Good food and maybe prayer potions are advised if you are to visit the queen.

There is an alternative underground entrance to this dungeon from the Dorgesh-Kaan South Dungeon, which avoids the desert heat and the need for one of the ropes. However, players should have a light source when travelling through the south dungeon. Fairy ring to Dorgesh-Kaan dungeon is AJQ. 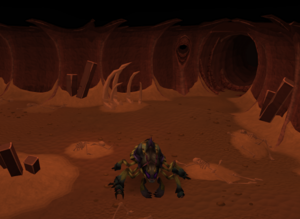 The upper level has many Kalphite workers and some Kalphite soldiers. Two Kalphite Guardians watch the exit to the second level. Three Potato cactus spawn in a chamber on this level. Kalphite larva, which cannot be attacked except by Cats, roam the level. 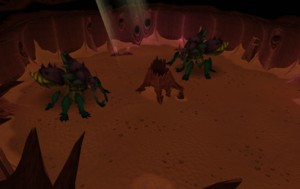 Last stop before the Queen...

The second level has two exits: 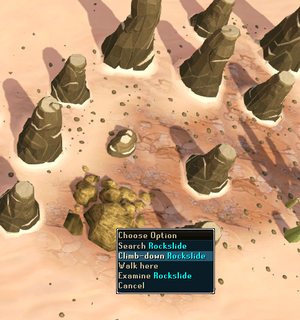 Potato cactus are used in:

Potato cactus tend to sell for a good price (837 on the Grand Exchange).