The massive temple with dead mourners in front of it.

The Temple of Light is an ancient structure built by elves to protect the Death Altar. The Prifddinas Death Guard will do anything to get their hands on this place, in order to gather a sufficient amount of death energy to break the Dark Lord from his imprisonment and restore Prifddinas without the help of the other seven clans.

Swarming with level 95 Shadows that can easily hit 200s, it is discovered during Mourning's End Part II. The temple is a complex maze, with the manipulation of light being necessary to proceed.

Players may also find dark beasts east of the entrance, which are often killed (requires 90 slayer) for the dark bow that they drop. The temple can be found under West Ardougne at the mourner's HQ. Located in these tunnels is also a single runite rock at the Mourner Tunnels mine. 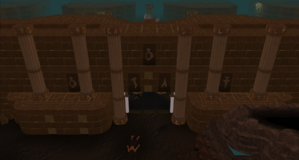 The entrance to the Temple.

After 20 October 2009, after completion of Within the Light, Eluned gained the ability to enchant a crystal teleport seed to teleport to the Temple of Light as well as Lletya. This is the quickest way of getting to the Temple of Light, and none of the mourner gear is required. If the player chooses to have Eluned die in the quest series, she is replaced by Islwyn in Prifddinas. In this case, speaking to Islwyn will enchant the crystal teleport seed.

For players who haven't completed "Within the Light", mourner gear is required to enter through the front door in West Ardougne since it is in the basement of Mourner's HQ. If the player has completed Mourning's End Part II, the Crystal trinket is also needed or else the player will be stopped with the message, "A strange force blocks your path". The New key is required to enter the dungeon from the basement; it can be found on the Head Mourner's desk in the basement.

Alternatives without Mourner gear would be to go through:

Players then proceed to the dwarf camp at the southern wall, and use the tunnel to the Death altar. This method can only be used if you've completed Mourning's End Part II and talked to the Dwarf at the altar about the tunnel. Alternatively, if you have finished Within the Light, you can teleport to the temple using a crystal seed. The player could also enter the Abyss, go to the death rift, and then use the portal to teleport next to the altar. Using a death altar teleport to teleport into the altar is also a viable option.