Gu'Tanoth is the ogre capital city, south of Yanille and far south of Ardougne, in the Feldip Hills. Players can enter Gu'Tanoth after starting or completing the Watchtower quest. It will also ask you for a variety of items to prove your worth.

The fastest way to get to Gu'Tanoth is to use a Gu'Tanoth Teleport. It teleports the player directly north of Bogrog and allows fast access to the Summoning obelisk.

Players can also home teleport to the Yanille lodestone and run south. 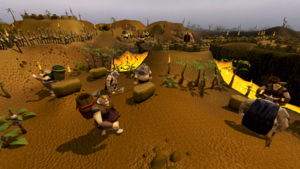 The "market" of the ogres.

The city of Gu'Tanoth is home to two traditional stores. The first, Dal's General Ogre Supplies, is a general store run by Dal that stocks very basic items seen in most other general stores.

The second, Grud's Herblore Stall, is, as the name suggests, a store run by Grud that stocks ingredients used in the Herblore skill. Such items include vials and vial packs, pestles and mortars, eyes of newt, and eye of newt packs.

There is a stall featuring some rock cakes which may be stolen from with a Thieving level of at least 15. The rock cakes inflict damage if consumed, and are used during the Watchtower quest to gain access across one of Gu'Tanoth's bridges.

To enter town by the southern gate, a player needs to pay the guards 1 gold bar.

The Ogre Enclave contains many high level monsters such as blue dragons, greater demons, and ogre shamans. In the centre of the cave is the Rock of Dalgroth, which you can mine while completing the Watchtower quest for the fourth crystal. The ogre shamans in there are invincible and can only be killed during the quest.

The island to the east which contains a dig spot for a Treasure Trail Co-ordinate Clue cannot be accessed directly from the surface. The only method of travel is the ladder, which can be accessed from the Cave Entrance outside the city, to the south-west.

The skavid caves are home to the skavids, slaves of Ogres. To enter their caves you must have a skavid map, which you get during the Watchtower quest, and a light source.

There is a Summoning obelisk and shop, just before the entrance to Gu'Tanoth. Bogrog will swap spirit shards for Summoning pouches at a 70% rate, provided the player's Summoning level is high enough relative to the level requirement of the pouch being traded (see the Bogrog article for more information). At least 21 Summoning is required to swap pouches into spirit shards.