From the RuneScape Wiki, the wiki for all things RuneScape
Jump to navigation Jump to search
The Old School RuneScape Wiki also has an article on: osrsw:Ruins of Camdozaal 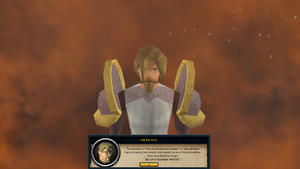 Inside The Sacred Forge

Camdozaal is a ruined cavern which was once the hall of the Imcando dwarves. It is located inside Ice Mountain and can be accessed during and after the Defender of Varrock quest. It is entered through the hole on the northern side of the mountain where the Oracle is located, which the player uncovers during the quest.

A light source is required in Camdozaal. Without one, biting insects will attack, constantly hitting for 10 points of damage until crawling out of the cave. The insects cannot be fought and protection Prayers do not affect them.

Camdozaal was a crucial centre for the Imcando dwarves. The hall was destroyed by barbarians during the Great Invasion, as the barbarians feared the use of magic like the superheating of ore spell the dwarves were using. The collapse of the hall killed many Imcando dwarves, and all but one of the survivors then fled the hall. Blind Ramarno stayed in the ruins to tend The Sacred Forge. He survives on the water and fish from the pool that connects to the outside world. The dwarf that fled was Thurgo, the Imcando that makes Sir Vyvin's sword in the Knight's Sword quest.

It seems that most of the Imcando dwarves perished during the destruction of the hall. After the hall was ruined, many people throughout Gielinor believed that all Imcando Dwarves died. In recent times, two survivors have been found, Thurgo and Ramarno.

At the moment, there are two rubble-filled tunnels leading to the south and west. The tunnels are inaccessible.