The dungeon does not have any requirements to access. However, specific activities or enemies have skill requirements. Completion of Sliske's Endgame, Desperate Measures, and City of Senntisten is recommended to unlock additional rewards and better understand the story.[1] The bosses do not require a killcount and skill requirement to access unlike the previous God Wars dungeons.[2] Wielding the Shard of Erebus, a post-quest reward from the Battle of the Monolith miniquest, renders the monsters in the dungeon unaggressive. Among the rewards, each front will introduce a new god book based on each of the Elder Gods.[3]

The dungeon is located in the intact portion of the city of Senntisten with the Cathedral of Azzanadra housing the eggs of the Elder Gods being the target of the invading armies.[3]

Each front release came with a free death week, including no item reclaim costs on death and no loss of Ring of death charges upon death.[3]

Zaros, a divine creation of Mah alongside Seren, sought to become an Elder God himself to stop The Great Revision. However, during his meeting with Jas, he was promptly refused as he could not create life from nothing. At the same time, Jas tasked the World Guardian with proving that mortal life deserved to exist. Believing himself to be up for the task, Zaros attempted to search for ways to do so, but eventually came to the conclusion that Gielinor was a lost cause. Recalling a realm beyond Gielinor that might have what he sought, he decided to head there, making immense preparations in order to do so.

This ended up culminating in the Battle of the Monolith, in which Zaros accessed the Codex and forcefully opened it, unleashing shadow creatures from said realm, Erebus, into Gielinor. The Saradominists, Crux Eqal and the World Guardian immediately made a truce with the Zarosians and fought the creatures. However, they proved to be too strong and the World Guardian was forced to call on the aid of the TokHaar, Ful's creations. The TokHaar were able to drive the creatures back and Azzanadra closed the Codex, but too much shadow anima had leaked into Gielinor and the TokHaar immediately declared war on the surface dwellers for what happened. Given that the Elder Gods were active but in a monitoring state, it is likely that they deemed the trial a failure and ordered the TokHaar to attack the surface-dwellers.

Azzanadra, now having ascended to godhood, quickly realised the grave threat of the Elder Gods' eggs and immediately sought to find a location to hide the eggs to prevent the Elder Gods from touching them to begin the Great Revision. With the help of Ariane, Charos and the World Guardian, who brought Saradomin, Zamorak, Armadyl and Seren, Azzanadra used his powers to move the eggs from the Elder Halls into Senntisten. The Elder Gods were immediately made aware of the theft, but knowing they could not directly intervene without risking the destruction of the eggs, began preparing their forces to retake the eggs and enact the Great Revision.

Jas was the first to rally and send an army, consisting of Kerapac and the Nodon dragonkin, both being enslaved to her after Kerapac's attempt to kill the Elder Gods.

Sometime afterwards, with Jas' attack at a standstill, Wen, in desperation to reclaim her egg, summoned a portal to connect Senntisten and Leng, bringing forth numerous glacytes, glacors and a single Arch-Glacor.

Though Wen's army initially decimated the opposition, eventualy the conflict de-escalated into another stalemate. Seeing this, Bik awakened Croesus, a sentient fungus that was buried deep beneath Senntisten's graveyard.

Ful is currently rallying her forces to assist her sisters. 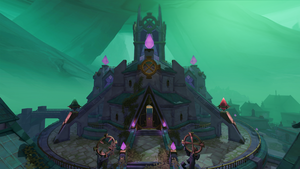 Cathedral of Azzanadra, found in the centre of the dungeon

The Cathedral is the central hub of the dungeon. The mortal gods' forces fight against the four Elder Gods' factions, to prevent them from seizing the eggs stored in the cathedral.

Following the release of the Nodon Front, the gods protecting the eggs received new dialogue weekly.

Enemies in the front include:

The glacors have arrived to Senntisten, freezing everything in their path. In order to face the glacors in battle, the player must have a Slayer level of 84 or higher.

Enemies in the front include:

Revived by Bik, Croesus is slowly absorbing all organic matter in its path. Unlike the other fronts, there are no mobs in this front; rather, skilling nodes can be harvested for materials, requiring level 88 in Hunter, Woodcutting, Mining or Fishing. Enhanced nodes may appear, which require 92 in said skill in order to be interacted with.

Skilling nodes in this front include:

The "general" of each faction is located at the end of each front. Unlike the previous two God Wars Dungeons, the generals in this dungeon do not require any killcount or skill requirements in order to access. 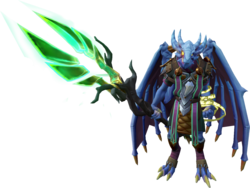 A renowned Dactyl dragonkin, Kerapac has been forced back to Jas' service following the events of Desperate Measures. Coming with two Elder Artefacts, the Siphon and the Needle, Kerapac's power and the mastery of time allows him to rewind time and bring forth copies of himself to assist him in fighting challengers.

Rewards from subduing Kerapac in normal mode include the Scripture of Jas, a god book that allows the player to "store" damage and inflict it after the effect expires, Kerapac's wrist wraps, tier 85 magic power gloves that can allow the player to instantly apply all Combust hits in 1 tick after using Dragon Breath within 10 seconds, and the Greater Concentrated Blast ability codex, which upgrades Concentrated Blast to its greater variant, which hits faster and harder. In hard mode, parts of the Fractured Staff of Armadyl are also awarded, a tier 95 two-handed staff. 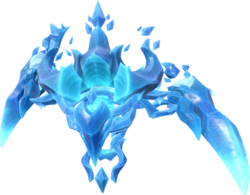 The Arch-Glacors of Leng are massive beings summoned by Wen, that tower over their smaller brethren. Unlike other bosses, the Arch-Glacor is more customizable for normal mode, intended to introduce players to bossing by allowing mechanics to be toggled on and off, albeit at the cost of being less rewarding with fewer active mechanics. It can only be fought alone in hard mode and is similar to Telos, the Warden in terms of reward mechanics.

Rewards for subduing the Arch-Glacor in normal mode include the Scripture of Wen, a god book that allows the player to inflict AoE damage and materials to create various items, such the Dark Ice Shard and Dark Ice Sliver, a pair of tier 85 melee weapons, cosmetic wings and upgrades for Kerapac's wristwraps, gloves of passage and nightmare gauntlets to tier 90. In hard mode, the Frozen Core of Leng is added, which combined with the tier 85 weapons and some materials, upgrades them from tier 85 to 95. 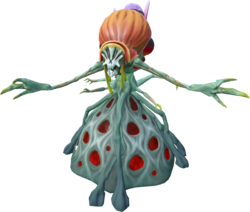 A biological weapon developed by Zarosian scientists, Croesus is a fungal monstrosity that had caused havoc in the city of Senntisten during the Second Age to the point that even Zaros was forced to intervene. Unlike the previous two bosses, the fight against Croesus mostly revolves around skilling and it lacks a hard mode variant. It uses its powers to choke the life out of its enemies.

Rewards from subduing Croesus include Cryptbloom armour, a tier 90 magic tank set that has various bonuses with more pieces worn, such as reducing magic and melee damage, increasing damage when attacking targets from behind, and a shield that activates upon the wearer reaching 20% of their health, its durability scaling based on the player's armour rating and Defence levels and lasts for 15 seconds with 120 second cooldown.

It also drops two tier 80 skilling off-hands; Sana's Fyrtorch, a Woodcutting off-hand that increases log rates by 6%, 20% to double logs and the ability to obtain deathspore arrowtips. The other is Tagga's Core Hammer, which increases mining critical hit rate by 10%, damage by 35 and the ability to obtain splintering arrowtips. These two arrowtips can be used with elder logs to create tier 95 arrows with special effects. A seed bag is also available along with a grasping rune pouch, which can carry four types of runes and comes with a prayer bonus. As with the previous two generals, it also drops an according god book, the Scripture of Bik, which allows the player to generate catalysts of alteration that awards 1-3 clue scrolls when interacted with.