From the RuneScape Wiki, the wiki for all things RuneScape
Jump to navigation Jump to search
The Old School RuneScape Wiki also has an article on: osrsw:Dagannoth 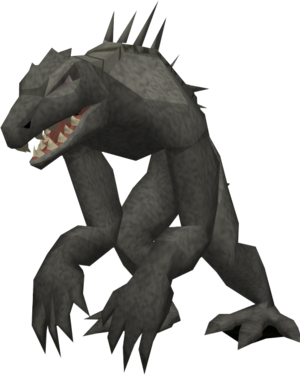 Dagannoth, known as Daggermouths to the Fremennik, are sea monsters. Many are found near areas inhabited by the Fremennik, who hunt them for their skin, which is used to make armour. There are many types of Dagannoth, the most powerful being the three Dagannoth Kings.

Although there are no requirements to kill Dagannoth outside of decent combat stats, in order to be assigned them, the player must have completed Horror from the Deep. As such, you must have a combat level of at least 75 to be assigned Dagannoth as a slayer task. The Balmung (as well as its upgraded form), released with the quest Blood Runs Deep, hits them very hard, similar to the effect of using Keris on Kalphites or Scabarites. It is possible for Dagannoths to be assigned as slayer tasks if a player is wearing Mask of the Dagannoth.

Little is known about the origins of the dagannoth species. If the story of Knut's death at the hands of dagannoth is true, they were a threat as far back as V's lifetime,[1] a span of time which could include the Third, Second, and possibly even as far back as the First Age.

During the Second Age, Dagannoth were captured by the Zarosian Empire for reasons unknown. Not having the proper facilities to do so, many were released into the wild and mostly settled in caves, where they grew in large numbers that they posed a threat to Senntisten, led by a single Dagannoth Mother. The hunter Vendi captured the mother and released it out to sea, where the rest of the Dagannoth apparently followed suit.

The ancestors of the present-day Fremennik fought the dagannoth sometime in the distant past. Back then, they nested somewhere near Rellekka. The Fremennik believed they had driven the dagannoth back into the ocean for good. It was only recently that there was a resurgence and dagannoth began hatching again. A number of dagannoth migrated to Waterbirth island, which Jarvald speculates is due to a dagannoth queen nesting nearby. Since then, the Fremennik have been happy to hunt the creatures.[2]

It is unknown how the Dagannoth are organised, though it seems to be extremely similar to Kalphites.

Dagannoth hatch from eggs. As they grow, they become fledgelings, before fully maturing into the Dagannoth that is well-known by the Fremennik people. Dagannoth attack their enemies by biting them with their razor-sharp teeth, or launching spines from their backs.

The Dagannoth are spawned by what appears to be a single mother, who is the leader of the Dagannoth. The mother is extremely strong compared to her offspring, as she can change her carapace at will to make her immune to most damage, requiring fighters to quickly change their combat accordingly to damage her. If the mother dies, then another will quickly take her place, as shown with the first mother who was slain by an adventurer, prompting her daughter to take her place.

The Dagannoth are also led by three Kings, each specializing in a single combat style. Though their carapace is not as strong as the mother's, it provides them with complete protection from combat styles they are neutral and strong against. It is unknown what roles the Kings play in Dagannoth society, apart from protecting their leader.

Dagannoth prefer a damp climate, as stated by the Rex hatchling.

The Dagannoth believe in the "Day of Rising". The Dagannoth King hatchlings and the Spirit Dagannoth explain that it is a terrible event where the world is flooded for the Dagannoth to take over the surface world. Though all surface dwellers would die, those who submit first are eaten, while the rest are consumed later.

The Dagannoth seem to be on friendly terms with rock crabs, rock lobsters, and wallasalkis, as they are often found with them.

There are several types of Dagannoth, which vary by level, location and occasionally name. For information on a specific type of dagannoth, see its article.