Brimstail is a gnome wizard who lives in a small cave in the south-west part of Tree Gnome Stronghold, near the river. He can teleport a player to a Rune Essence mine if they have completed Rune Mysteries.

Brimstail is one of the few gnomes that uses magic. He dabbles in the gnomish art of illusion spells, and is actually in possession of the machine that Oaknock used to prove the death of Argento the spirit tree. 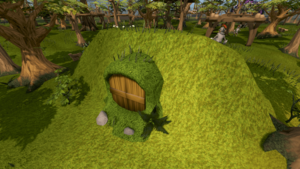 The entrance to Brimstail's house.

Brimstail plays a large role in The Eyes of Glouphrie quest. With the aid of an adventurer, he manages to rebuild the ancient disillusionment machine and proves the existence of evil creatures within the stronghold itself. Had Brimstail not pursued his wish to reconstruct the machine, the stronghold may have fallen to the gnomes of Arposandra.

Players can obtain another crystal saw from Brimstail by speaking to him.

He is also potential customer Gnome Restaurant minigame if done on the easy option.

He is involved in two Treasure Trails clues. The first involves completing a challenge scroll (answer is 6859) and the second is as the answer to the anagram "BAIL TRIMS".