From the RuneScape Wiki, the wiki for all things RuneScape
Jump to navigation Jump to search
The Old School RuneScape Wiki also has an article on: osrsw:Odd Old Man
For other uses, see Old man (disambiguation).
Odd Old Man? (edit)? (edit)

The Odd Old Man (real name: Archibald Paldock) starts the Rag and Bone Man quest and, afterwards, the Fur 'n Seek quest. He collects bones, furs, teeth, and similar items for what was previously an unknown purpose. The bone sack on his back appears to talk to him and tell him what to say. He says he works for the Varrock Museum, bringing stuffed creatures to put on display, but his phrasing suggests he is misleading the player, to hide the real reason why he wants these items.

The Odd Old man gives you either a bonesack or ram skull helm when you have completed the Rag and Bone Man wish list, and enhances them after completion of the Fur 'n Seek wish list.

He is located at the Silvarea mining site, north-east of Varrock.

Players doing Treasure Trail clues are sometimes directed to him with the anagram 'Land Doomd' and are given a puzzle box.

Archibald and his sack of bones assist an adventurer with a murder investigation in Missing, Presumed Death.

After completing the wish list from the Fur 'n Seek quest, it is revealed that the old man had found the remains of a powerful, undead, mind-controlling skeletal horror and carried them in the sack on his back for over 10 years, and the bones collected by the player during the quests and wish lists were needed to construct the beast. It is also revealed that he used the furs from Fur 'n Seek to make himself a new outfit. The player then defeats the Skeletal Horror, freeing the Odd Old Man from its control. Afterwards, the old man sets about rebuilding the monster for "research purposes" and invites the player to return once a week to ensure the beast is kept under control.

Transcripts Odd Old Man is the author or co-author of: 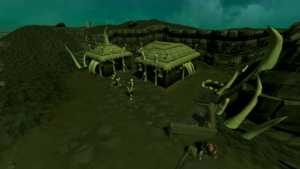