Royal Trouble is a Fremennik quest that takes you to Miscellania. Mysterious robberies threaten to plunge it into a war with neighbouring island Etceteria and, as regent, you are to investigate the occurrences to prevent this from happening.

It's tough being the regent of a small island kingdom, especially when the King has declared war while you were off adventuring.

Something is up in Miscellania and Etceteria, and you'd better find out what, before both kingdoms end up in Royal Trouble! 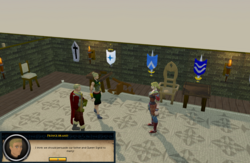 Prince Brand suggests that the player gets Queen Sigrid and King Vargas to marry.

Travel to Miscellania and make your way west to the castle. Climb your way up to the throne room, and speak to Advisor Ghrim. He informs you that your subjects are worried about the possibility of another war between Miscellania and Etceteria.

With nothing to do, and the inability to leave the castle, King Vargas has been trying to rule again and in the process, has started a quarrel with Queen Sigrid of Etceteria. Ghrim suggests you talk to the prince/princess to learn more.

Speak to either Prince Brand or Princess Astrid in their respective rooms, next to the throne room. You see a cutscene in the throne room, where the prince and princess discuss an imminent war, and the steps that could be taken to prevent it; the prince offers a solution - trying to persuade the King of Miscellania to marry the Queen of Etceteria.

Now, speak with King Vargas about his war threats against Etceteria and he'll explain that he is just retaliating to Queen Sigrid's insults. He quickly changes the subject, telling you that various resources in his kingdom have been going missing, and asks you to investigate by talking to the citizens of Miscellania and Etceteria.

Exit the castle, and talk to any employed subject about the missing goods. They'll tell you that Etceterian soldiers came and demanded tithes from them. Your subjects refused, and they soon found some of their goods stolen.

Head east, cross the bridge over to Etceteria, and enter their castle. Climb the stairs to the 1st floor[UK]2nd floor[US] and speak to Queen Sigrid. She tells you her side of the story, also saying that items have been stolen from her subjects, and is immediately suspicious of King Vargas.

Go outside the castle and talk to one of the citizens there (except for the fishmonger or greengrocer, as they will just trade with you). Talk to Gardener Gunnhild if all of the citizens are only saying "Good day, Your Royal Highness". They'll tell you the same story as their Miscellania counterparts, but instead point the finger at Miscellanian soldiers.

Inform both King Vargas and Queen Sigrid of the current situation, and they'll tell you that neither of their lands has an army. King Vargas also suggests speaking with Advisor Ghrim, to gather anything about recent suspicious activities. Next, speak to Advisor Ghrim, who deduces that since Miscellanians are very loyal, the thieves must have arrived onto the island from outside, and proposes talking to the sailor at the docks.

Visit the Miscellania docks and converse with the sailor on the boat. After saying that Advisor Ghrim is struck with paranoia, he mentions "those kids from Rellekka" who had come to visit their relatives in the dungeons. On further inquiry, the sailor tells you that since the war ended, more people have flocked over from the mainland and the dungeons had to be opened up for providing them shelter, and that's where the kids can be found.

Speak to King Vargas again and ask how you can get into the dungeons to investigate the new arrivals. Bemused on having forgotten about the dungeons, he writes on a scroll, granting you access into the underground caves. Before leaving, he also requests you to take a look into the odd sightings reported there.

Items needed: Combat gear, food and five pieces of coal (can be mined in the dungeons)

Locate the dungeons in the south-west corner of Miscellania's marketplace, and show the scroll to the guard there. After he approves, climb down the ladder to arrive in a small underground town.

Head to the bar on the eastern side of the underground town, and speak to the dwarf named Donal. He tells you that he is working on the excavations but fears an enormous, terrible monster inside the cave tunnels to carry on with his work. Tell him you will go fight the monster and he guides you how to get deeper into the tunnels. He gives you a mining prop for stabilizing the cave entrance, and says you will have to fix the lift to climb the ledge.

Walk to the north-west edge of the underground area, use the mining prop on the crevice, and then squeeze through it. 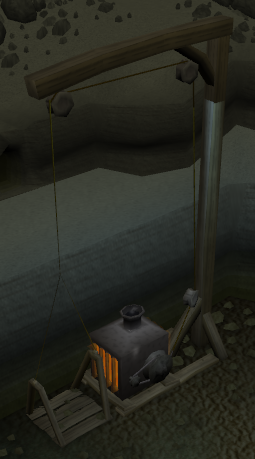 Now, you need to repair the lift using items found in the boxes in the chamber:

The lift should be operational now. Before continuing, make sure you have a rope on you (grab another rope from the crate if needed) and then 'use-lift' on the platform to head closer to the mysteries of the island. 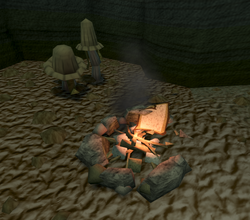 The fire remains with a page from a diary.

After you step off the lift, grab the plank on the ground and enter the small tunnel to the east. Follow the cavern east until you see a water pool. Use your rope on the overhanging rock, and cross over the pool on the new ropeswing.

Head east a bit, and search the fire remains to find a burnt diary, and a page in the embers; read the charred diary if you wish, and be sure to keep it. Follow the bend further into the cavern until you reach another water body. Use the plank on the slippery rocks to walk over them. 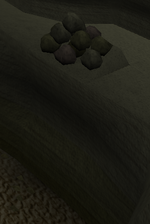 There is a very suspicious pile of rocks up there...

As you travel through the cavern, search all the fire remains to find and add pages to the burnt diary.

Keep an eye out for piles of rock on the cavern walls: if you walk near them, the rocks will tumble down and cause 320 life points of damage. To avoid the rocks, just walk closer to the middle of the caves.

Search the last fire remains for the fifth page of the diary, and read the finished notes. If you don't read the completed diary, you cannot proceed further; your chatbox dialogue will say "Maybe I should explore the cave more, before I go jumping through any more crevices."

A bunch of Fremennik teenagers.

Follow the bend of the cavern until you come to a crevice in the north wall. Squeeze through it to start a cutscene.

You engage five lost, young Rellekkans - Armod, Beigarth, Hild, Reinn, and Signy - in conversation. The teenagers explain that they were unable to pass their own trials to become Fremenniks, so they hatched a plan to start a war on the islands and then stop it to be seen as heroes and peacemakers by their clan.

When the cutscene is over, continue talking to the kids. They tell you that they kept aside the stolen goods to return after their plan was complete, but a huge sea snake took residence with them, and request you to take care of it in exchange for leaving the island.

Leave the Fremennik teenagers, and continue into the cavern, passing lots of non-aggressive, venomous sea snake hatchlings and sea snake young, until you come to a shaft of light from the surface and a crevice in the north wall; squeeze past it. 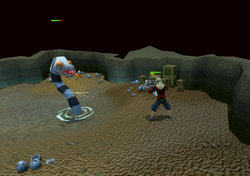 Attack of the sea snake!

You enter a chamber filled with hatched and unhatched snake eggs, and a giant sea snake (level 63) emerges out of the water.

With a Defence level of around 50 and level-appropriate equipment, the fight should not be a challenge. The sea snake fights with melee up close and ranged from a distance, and the appropriate protection prayers are recommended. The snake will poison you if you are hit successfully, so take a sip from an antipoison potion either before entering her chamber or as soon as she poisons you.

After she is killed, pick up the heavy box containing the stolen items, albeit only from Etceteria. Exit the cave and, through the hole above the chamber, a guard sees you and tosses a rope down for you to climb up. Do so, and you'll find yourself just outside the town walls of Etceteria.

Make your way to Queen Sigrid, and inform her of what you learned about the teenagers and the sea snake. She gives you an apology letter to take to King Vargas, thus preventing a possibly devastating war. Head back to King Vargas, telling him too about the situation in the dungeons, and give him the Queen's letter to complete the quest. 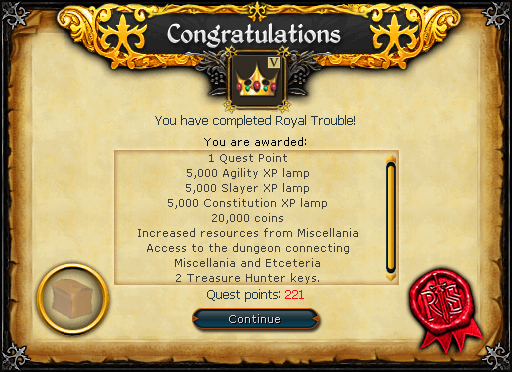 Royal Trouble is directly required for the following quests/miniquests:

Taking the lift up after it has been repaired.