Sabbot is an elderly, and slightly senile dwarf who resides in the cave below Death Plateau, west of the Troll Invasion gatehouse. He reluctantly agrees to help players in the Death Plateau quest to find a way to ambush the trolls so that he can finish building his shop, in order for his wife to move back in with him.

Before the quest, he can be found in the dungeon directly north of the Warriors' Guild. Once inside the dungeon, enter the cavern on the west wall.

After the quest Sabbot can be found in a small cave on the west wall of his original cave, west of the Troll Invasion Gatehouse. If you cannot find him in the troll invasion dungeon directly north of the Warriors Guild, go into the cave on the north side of the canyon leading west from the gatehouse. This is a small cave with a cavern on the west wall - where Sabbot is.

Players doing Treasure Trails clues are sometimes directed to him with the anagram 'Boast B' or 'Stab Ob'. 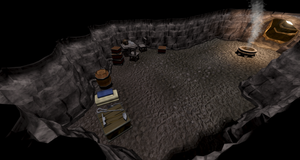