The Battle of Rellekka takes place during Blood Runs Deep. It is the final major conflict in the concurring war between the Fremennik people of Rellekka and the 'dagger-mouths' who have since taken residence on Waterbirth Island. When an unconscious Silas, former keeper of the Lighthouse, was found on Lunar Isle, Baba Yaga and an adventurer entered his dream to find out that he was cooperating with the new Dagannoth Mother to launch a massive attack on Rellekka.

As they exited his mind, the attack had already begun and the adventurer aided Chieftain Brundt in killing dagannoth until they could leave on his longboat. With the Royal Family of Miscellania and Etceteria, they went to rescue King Vargas, who had been captured by the dagannoth. Meanwhile, the battle raged on in Rellekka.

After the adventurer defeated and sealed the Dagannoth Mother while Koschei the Deathless, Princess Astrid, Prince Brand and Baba Yaga distracted the Dagannoth Kings who had just arrived to the scene, the attacks on the mainland stopped and the remaining Dagannoth were killed, marking the end of a long and tedious war. 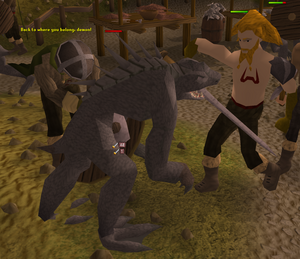