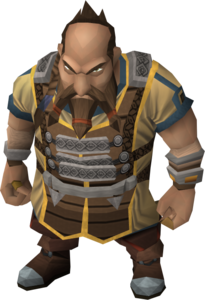 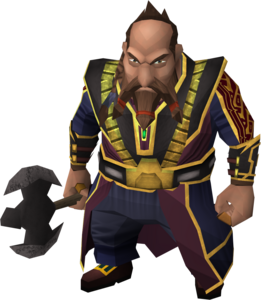 Riki is the model of Blasidar the Sculptor. He features in The Giant Dwarf, helping Blasidar reconstruct the fallen statue on the River Kelda. He can be found in a medium sized house, marked "Gravestone exchange" on the map, on the east side of Keldagrim, directly east the Consortium's Palace.

After the statue of King Alvis was destroyed in a boat crash during The Giant Dwarf, Blasidar volunteers to help rebuild the statue with the help of an adventurer. After the necessary items are gathered to resemble the statue, Riki dresses himself, and from there the statue is rebuilt.

He is also in an anagram clue for clue scrolls, his anagram is: HE DO POSE. IT IS CULTRRL, MK?; Players are then given a puzzle box.

This information has been compiled as part of the update history project. Some updates may not be included - see here for how to help out!
Retrieved from ‘https://runescape.wiki/w/Riki_the_sculptor%27s_model?oldid=35592667’
Categories:
Hidden categories: