Throne of Miscellania is a quest about the Fremennik island Miscellania, whose king, Vargas, has unfortunately become a yeti, thus making him require a regent to rule his kingdom while he is unable to.

Rumours have been coming back from Miscellania that all is not well. It is said that the king has been turned into a monster! An exceptional hero is required to investigate. Experience in ruling kingdoms, wooing royalty and negotiating peace would be an advantage.

Miscellania and Etceteria are two islands off the northern coast of Rellekka, connected by a single bridge. To reach the islands, either take the longboat from Rellekka, use the fairy ring code CIP, or use a Miscellania teleport scroll (having several scrolls may be useful to reduce walking during the quest).

Speak with the king[edit | edit source]

Make your way to Miscellania and head to the large building in the western part of the town. You can use CIP, which is a little north from the castle. A Miscellania teleport scroll will take you directly to the middle of the castle (where the market stalls and villagers are).

Take the stairs up to the 1st floor[UK]2nd floor[US]. On your first visit to the throne room, the guard questions you, blocking access to all but "true heroes." After declaring your Fremennik title and your membership in the Heroes' Guild, you are allowed to enter the throne room. Speak to King Vargas to officially begin the quest. He tells you a bit about himself and says he is looking for a regent for his kingdom. Offer to take on the duties of regent and the king asks you to first demonstrate your worth by making peace with Etceteria and by becoming part of his royal family by marrying either his daughter or son.

At this point you have three tasks; making peace, engagement, and approval of the people, though this last will only show up in chats after the first two are complete. Any of them can be completed in any order, or at the same time, though progress through the engagement and the peoples approval will be reset by leaving the isles.

Talk with Advisor Ghrim, who is off to the side behind the King, and ask him how to make peace with Etceteria. He tells you to talk with Queen Sigrid of Etceteria. Head east, cross the bridge over into Etceteria, enter the large building in the east side of town, climb the stairs to the first floor, and enter the centre room, where you find Queen Sigrid.

Speak to Queen Sigrid. After you tell her you have been sent by King Vargas to negotiate a treaty, she says she will agree to a peace deal if King Vargas will accept Etceteria officially as a sovereign nation. Return to Vargas, and tell him what the queen said. He says he will recognise her country if she changes Etceteria's national anthem.

Dash back to Queen Sigrid, and speak with her. Although she at first says it is a great anthem and that she composed it herself, she eventually agrees but requests that you come up with a new anthem. Return to Miscellania, enter the room to the south of King Vargas's throne room, and speak to Prince Brand. You tell him you need a new anthem, and he agrees to write you one immediately. It is, however, terrible. He gives you the awful anthem.

Enter the throne room next door, and talk to Advisor Ghrim about the anthem. You give the advisor the awful anthem, and he makes a few adjustments, turning it into a good anthem. Return to Queen Sigrid, and tell her you have a new anthem. She is pleased with her new anthem and hands you a treaty — which she has already signed — to be signed by King Vargas.

Take the treaty back to King Vargas, and tell him it is awaiting his signature. He says he cannot sign it with an ordinary pen. He needs a pen large enough for him to hold. Head to the northern shore of Miscellania, to the east of the Miscellania mining site, where you will find Derrik in the house with the anvil. Talk to Derrik, and tell him you have a strange request. He says he can make a giant nib if you have an iron bar.

Give him your iron bar, and he gives you the giant nib. Use the nib on logs, and you end up with a giant pen. There are a few evergreens around the islands, so you don't need to go to the mainland if you have not brought logs. Take the giant pen to King Vargas, who then signs the treaty, bringing an end to the rivalry between the two kingdoms.

If you leave the island after beginning the quest but before completing it, your progress with the prince or princess is set back and your approval rating goes back to 25 percent. However, using the fairy ring transport system to go to Zanaris, and straight back to Miscellania does not reset your approval rating. You do not have to give the prince or princess gifts again or repeat the conversations, but you will have to go through all the emotes again. Changing your gender will also require you to restart this part of the quest.

Talk to Advisor Ghrim, and ask him how you are to get your chosen to marry you. You can decide between Princess Astrid or Prince Brand to marry. See the appropriate section below for the steps to follow.

Enter Princess Astrid's room, which is north of the throne room, and speak with the Princess of Miscellania. Start to tell her about your desire to become regent. She interrupts you to say she has many suitors. She will, however, give you a chance to impress her.

Speak to the princess a few times, and agree with whatever she says. Then use the flowers on her. You can buy flowers for 15 coins from the Flower Girl in the marketplace just outside the building from where the king presides. Now use any of the Dance, Headbang, Twirl, Jig, Snowman Dance, Zombie Dance, Goblin Bow or Goblin Salute emotes in her room.

Speak to her a few more times, responding with agreeable answers. Once she has nothing left for you to agree with, use a bow weapon on her.

Again, speak to her a few more times. When she calls you "dear," select and use the Blow Kiss emote on her.

Once she has nothing left for you to agree with, use the ring on her. She finally agrees to marry you. She says you two will have to put off the actual ceremony until you can find a priest but you can tell her father of the marriage.

Don't forget the ring and all other necessary items or you will have to leave and some of your progress may be reset.

Enter Prince Brand's room, which is south of the throne room, and speak with the Prince of Miscellania. You start to tell him about your goal of becoming ruler of the kingdom. He interrupts you and asks why he would be interested in a "crass adventurer like yourself?" He will, however, give you a chance to impress him.

Continue to talk with the prince, selecting the most flattering answers, until he asks if you would like to hear his poem. Tell him, of course, you would love to. After he recites his poem, select "Be still, my heart." He thanks you. Speak with him some more, responding with flattering answers. When he only says hello, give him the flowers (use them on him; select yes, they are for him) and use the Clap or Cheer emote (flowers and emote may be done in either order). If he says "Hello, ma'am," he's waiting for the flowers or the emote.

Continue to talk with the prince (he will ask you your name), providing him with flattering answers, until he asks if you would like to hear his saga. You wonder if you have the time to hear a whole saga, but he launches into it anyway. Continue to flatter and talk with the prince; when he only says "Hello, [Fremennik name]," give him the cake (be careful not to eat it).

Keep flattering the prince, and eventually he will ask if you'd like to hear a song he wrote about you. Tell him you're flattered, then select the Blow Kiss emote and give him the ring. If he says he could not possibly accept it, keep flattering him until he says "Hello, dear," and he will take it.

You ask the prince to marry you, and he says "Yes!" He says that you two love birds will have to put off the actual ceremony until you can find a priest but you can tell his father he has agreed to marry you.

After getting engaged, talk to King Vargas and tell him his daughter or son has agreed to marry you. He tells you the population, however, is not supportive of you being their ruler and suggests you try to gain their support. Talk to Advisor Ghrim next, and ask him how you can gain the support of the population. He says you could go help the King's subjects with their daily tasks and gives you the percent of the population who currently supports you.

You need the support of at least 75 percent of the population to become regent. You can check your approval rating by asking the villager you are helping. 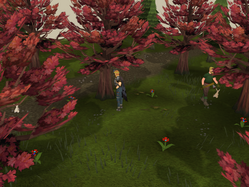 You will gain no experience for any activity, and you do not get to keep any of the resources you gather (except the weeds), however a Seren spirit can still appear if you have Grace of the Elves equipped.

An easy way to avoid accidentally killing villagers is to hide the NPC attack options in Combat Settings.

Once you have at least 75 percent of the public's support, talk to King Vargas to become the regent of Miscellania, unlocking the ability to manage the kingdom for rewards. 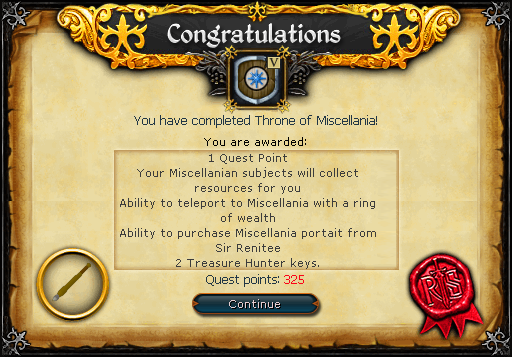 Throne of Miscellania is directly required for the following quests/miniquests: