Karim is the kebab seller in Al Kharid, located north-west of the palace, between the bank and the furnace. He is involved in some level 1 and 2 clue scrolls, where he gives a challenge. The answer to his challenge is 5.

When talked to, Karim sells kebabs for 1 coin each. However, he doesn't have an actual store interface, or a buy x option, so it takes 4 clicks to buy 1 kebab; buying one inventory of kebabs using the bank to the south takes about 90 seconds. 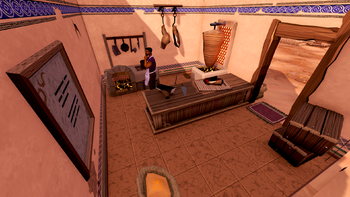 Karim in his shop.
Retrieved from ‘https://runescape.wiki/w/Karim?oldid=35582175’
Categories:
Hidden categories: