From the RuneScape Wiki, the wiki for all things RuneScape
Jump to navigation Jump to search
For the equipment set, see Linza the Disgraced's equipment. 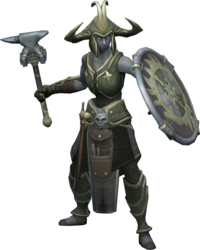 Linza the Disgraced is the eighth Barrows wight. She is the wight of Linza, who was turned by Sliske during Kindred Spirits, when he double crosses her after she betrays the player for protection from the Dragonkin.

Linza the Disgraced can be fought after the Kindred Spirits quest is completed. She shares her tomb with Ahrim the Blighted.

Linza's set effect is purely defensive; whenever she takes damage, there is a chance that she will reflect anywhere from 500-800 damage back onto the player. She will still take full damage from incoming attacks, however. Players should be wary of this when using Death's Swiftness or Sunshine, as the damage-over-time effects can easily stack into high damage if her set effect activates often.

Barrows amulets cannot be used against her.

Linza does not drop her main rewards directly; instead, her equipment is added as possible rewards from the Barrows chest. See Barrows#Rewards for more information. However, Linza can directly drop the following items.

During Sliske's Endgame, Sliske summons Linza along with Nomad as a wight and Gregorovic to impede the player after the Barrows brothers rebel against Sliske. She has 150,000 life points and keeps her passive effect of reflecting damage. She will also gain an ability that will cause her to shield herself and heal herself for 1,500 life points every few ticks, similar to Araxxor's web shield if she is not the first of the three defeated, and an ability that causes her to leap into the air and cause massive damage when she lands if the other two are defeated first.

After the events of the quest, she remains a wight and claims she is sorry for harming the player. She decides to stay with the Barrows brothers, as she believes that with their combat expertise and her Smithing skills they can be a great force for good, and that the living tend to be uncomfortable around the undead.