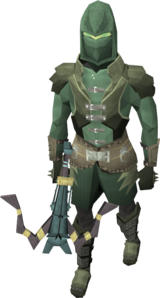 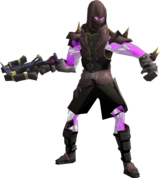 Karil the Tainted is the fourth oldest of the six Barrows brothers. Karil's crypt is located in the lower south end of the Barrows area. He attacks with ranged using his 2-handed crossbow and bolt racks.

Karil's set effect: Karil's Taint, allows his hits to have a chance to reduce the player's magic level. When this effect is activates an animation and a sound effect are triggered, and the player will suffer a loss of a Magic level. This effect is not very damaging to a player if they are not using magic, particularly if Overloads are used. Regardless, his hits are rather accurate so protection prayers/curses are advised. Soul split can also be used, but should only be utilised by experienced players.

During the Morytania-Misthalin wars, the Barrows brothers were devastating the Undead armies, cutting through their lines with ease. Karil was known for his secrecy and accuracy in battle; "Should any enemy manage to survive long enough, and have the chance to strike a blow, Karil would fire a swathe of bolts to pepper their chest as they took their swing, throwing them back" (this is a quote taken from The Fall of Six under the Lores section of RuneScape).

Karil, along with his brothers, maintained a small farm. Eventually, Guthan convinced him and the others to join the crusade.

Karil and his brothers made an appearance in Kindred Spirits, where he was chained with Torag, with Guthan attempting to keep balance between the pair and Commander Jaycliff. He was disappointed upon hearing that Guthan had betrayed them all to Sliske after killing Jaycliff. Sliske had set up the games to reveal the secrets of the brothers, but what Karil had kept hidden from his brothers is unknown, as the game was interrupted when Meg failed to impersonate the World Guardian.

During the 2016 Easter event, Karil the Tainted and his brothers play a role as the workers (bobble-numbskulls) of Sliske's chocolate factory. They resembled their bobble-head versions.

Karil, along with his brothers, appeared in Sliske's Endgame, being the second intended wave in Sliske's attempts to destroy the World Guardian. However, the Barrows Brothers had managed to regain a modicum of control over their own actions, and chose to aid the World Guardian, attacking Sliske's wights and champions.

Karil does not drop his main rewards directly; instead, his equipment is added as possible rewards from the Barrows chest. See Barrows#Rewards for more information. However, Karil can directly drop the following items: