From the RuneScape Wiki, the wiki for all things RuneScape
Jump to navigation Jump to search
The Old School RuneScape Wiki also has an article on: osrsw:Barrows brothers
For the achievement, see The Barrows Brothers (achievement). 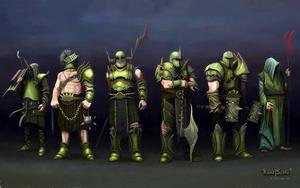 Concept art of the six

The Barrows brothers are a collection of powerful wights controlled by the Mahjarrat Sliske. They are named after the tumuli in which they are buried, found in southern Morytania. They are fought as bosses during the Barrows and Barrows: Rise of the Six minigames. Akrisae and Linza are not encountered in Barrows: Rise of the Six and do not have corresponding bobblehead Boss pets.

The original six brothers were a band of six legendary (actually five) Saradominist warriors who assisted Saradomin in his campaign to conquer southern Forinthry during the God Wars and soon after ventured into Morytania, leading the Morytania Campaign. While they were originally farmers in a small village, Guthan struck a deal with Sliske, who requested all six to join the crusades. Sliske provided them their unique equipment.

When they had nearly finished their campaign and were at the borders of the Sanguinesti, Sliske took the power he had gifted back from them, which caused all six to simultaneously sicken and die at the same time. The men they commanded lost all hope of finishing the campaign and built mounds to honour their sacrifice, before making the retreat up back north. Sliske then returned to the newly constructed barrows and cast dark magic on the mounds, reviving the brothers as vengeful spirits. [1]

Sliske had been tasked by Azzanadra to keep an artefact safe from Zamorak's followers, and it was kept in the barrows. The brothers were instructed to guard the artefact, and they did so dutifully for thousands of years. The dying prayers of adventurers exploring the barrows and the catacombs underneath it greatly powered the artefact by the time it was taken by an adventurer in year 169 of the Fifth Age, who had been tasked by Azzanadra to reclaim it after they defeated them. 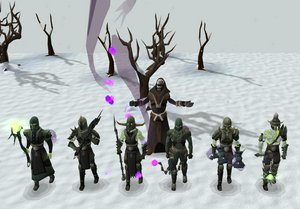 Sliske with his Barrows wights at the Ritual of Rejuvenation

The brothers are summoned by their master Sliske during the 18th Ritual of Rejuvenation. Arriving at the Ritual Plateau, they initially fought off the Armoured Zombies under the control of Zemouregal. After they defeated the zombies along with the same adventurer who stole the artefact from them, Sharathteerk under Zemouregal's orders summoned the hero of Varrock, Arrav. In this battle of the undead, Arrav had the upper hand - such was his might that the Barrow wights were unable to harm him. Arrav ceased fighting the brothers after the adventurer distracted and led him to the area where his heart was buried, causing him to break free of Zemouregal's control.

After the ritual, Sliske, having been impressed by the adventurer's prowess, attempted to convert them into a Barrow wight. His conversion spell was however intercepted by Akrisae; thereafter known as Akrisae the Doomed - the newest of Sliske's Barrow wights. Sliske was surprised, but content nonetheless with his new prize.

During the 'Grand Ascendancy' - a gathering of gods arranged by Sliske - the Barrows Brothers and Akrisae were summoned to the Empyrean Citadel to bar access to the meeting chamber from non-divine beings such as Zemouregal, who attempts to force his way through but is denied by the power of Sliske. Shortly after the meeting, Sliske experimented with the original Barrows Brothers in the Shadow Realm, granting them extra powers and some control over it.

The brothers were part of Sliske's game to enact entertainment as the gods had not gone to war as he had expected. He kidnapped Brother Samwell, Meg, Linza, and Major Mary Rancour. The World Guardian had no interest in playing his game until Sliske killed Brother Samwell, threatening the same fate onto the others if they did not comply.

In the first chamber, the hostages encountered Dharok fighting various Saradominist thralls, though he wanted no more in it. The World Guardian persuaded Dharok to let his tormentors kill him, who realised the errors of his ways when he was alive, before accompanying the group.

In the next chamber, the World Guardian persuaded Ahrim to take punishment in Saradomin's name. At the centre of the maze, Sliske dropped Guthan and the druidess Isolde with the two. Isolde had feelings for Guthan, which prompted Ahrim to kill her out of jealousy. Ahrim, having undergone most if not all of the flames, realised that he had been misguided and asked both of them for forgiveness before Sliske moved the group into the next room.

In the third chamber, Verac was being torn apart by a statue of Saradomin and Zamorak, and the only way to release him was to use a key from the god that had not claimed him. Verac claimed that he was a devout follower of Saradomin, but the World Guardian knew otherwise and tore a Saradomin key from his body, revealing him to be a follower of Zamorak to Ahrim and Dharok, much to their surprise. The destruction of the Saradomin statue also revealed a room that the World Guardian decided to investigate.

In the fourth chamber, Guthan was attempting to balance himself; on one side, he would harm Karil and Torag, while the other side would crush Commander Jaycliff, an old family "friend". Guthan learned from the hostages of Verac's worship of Zamorak, and revealed to the others his history with Jaycliff. After Ahrim murdered Isolde, Guthan believed she had run away and went to the bar to drink. Jaycliff was also in the bar, and the two ended up in a bar brawl that ended with his death. Fearful that the subsequent investigation would result in him being hanged due to having the blood of a Saradominist commander in his hands, Guthan revealed that he bargained with Sliske; if all six brothers joined the crusade, Sliske would protect him. Guthan's brothers accepted, though Torag had intended to join regardless.

Sliske soon noted the World Guardian was missing and investigated, finding out that they had looked into his plans. He revealed that Linza had betrayed the hostages, having stolen dragon equipment secrets from the Dragonkin and that she came to him for protection. Sliske intended to uphold their deal when she died but double-crossed her and turned her into a wight on the spot, becoming Linza the Disgraced. He then ordered the Barrows brothers to attack, but they refused and he instead resorted to collapsing the cavern.

As Sliske had intended the games to reveal the hidden and tragic past of the Barrows brothers, what Torag and Karil had kept secret remains unknown, since Sliske cancelled the game when he realised what the World Guardian had been up to.

The World Guardian, Rancour, and Meg managed to escape. Dharok called the World Guardian over, expressing gratitude as they now had some slight control over themselves, feigning loyalty to Sliske and promising to help them when the time was right.

The brothers work together to defeat the wights while the player defeats Sliske. After the battle, they return to their mounds, happy to be free of Sliske's control. They eagerly await the World Guardian's return so they can hone their skills, as the magic of the Barrows ensures that they won't die as easily. Linza also decides to stay with the brothers, so she may craft new weapons to compliment their skills. Though Akrisae is not interacted with at all, it is implied that he also decided to remain with the brothers.