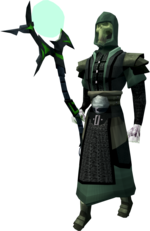 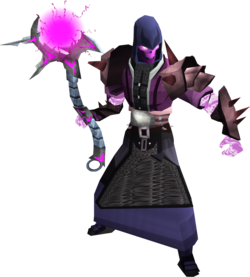 Ahrim the Blighted is the oldest and leader of the six Barrows brothers. Ahrim was the only magic-based brother until the release of Akrisae the Doomed with the Ritual of the Mahjarrat grandmaster quest (though is the only one available to players who have not completed the quest). Ahrim also casts Curse spells on the player that reduce Attack, Strength and Defence levels with each successful hit.

Ahrim's set effect, Ahrim's Blight, gives each successful attack cast by Ahrim a chance to lower a player's Strength level. Although the damage from the attack itself can be partially blocked by protection prayers/curses, the set effect cannot. Therefore it is advisable for a player to bring something to restore a player's Strength level back to normal if using melee, such as a restore potion or greater. This effect is accompanied by an animation as well as a sound effect.

Ahrim, along with his brothers, maintained a small farm. Eventually, Guthan convinced him and the others to join the crusade.

During the 2016 Easter event, Ahrim the Blighted and his brothers play a role as the workers (bobble-numbskulls) of Sliske's chocolate factory. They resembled their bobble-head versions.

Ahrim, along with his brothers, makes an appearance in Kindred Spirits. Sliske puts him through a "game" of righteousness where he navigates through the maze and makes decisions (either by himself or the adventurer) to reach the centre of the maze.

When Ahrim arrived at the centre of the maze, Sliske dropped a druidess named Isolde, the adventurer and Guthan inside. It is shown that Ahrim had killed Isolde to "protect" Guthan from her "godless" faith; however, the true reason was that he killed her out of jealously because she did not reciprocate her feelings to him. If Ahrim was bathed in most of the blue flames, Ahrim realises that he had been arrogant the whole time and asks for forgiveness from both Isolde and Guthan. If Ahrim was not bathed in most of the blue flames, he kills Isolde again.

Ahrim, along with his brothers, appeared in Sliske's Endgame, being the second intended wave in Sliske's attempts to destroy the World Guardian. However, the Barrows Brothers had managed to regain a modicum of control over their own actions, and chose to aid the World Guardian, attacking Sliske's wights and champions.

Ahrim does not drop his main rewards directly; instead, his equipment is added as possible rewards from the Barrows chest. See Barrows#Rewards for more information. However, Ahrim can directly drop the following items.