From the RuneScape Wiki, the wiki for all things RuneScape
Jump to: navigation, search
For other variants of this item, see golden, non-lucky. 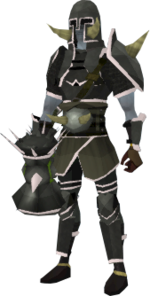 Lucky Torag the Corrupted's equipment is a set of armour that is obtainable from Treasure Hunter. It acts exactly like the normal version but is differently coloured.

This armour has a set effect called Corruption that may be activated when all pieces of Torag's equipment are worn, and only works during player killing. The effect causes successful attacks to have a chance of lowering the target's adrenaline by 20%.

There are two ways to repair Barrows armour. Players can talk to any of the NPCs listed below and they will repair the items for a price, or repair the pieces themselves using an armour stand in any player-owned house for a reduced cost based on their Smithing level. The equipment can be repaired at any stage, and the cost will be adjusted according to how much it has degraded. The repair costs below are as if the equipment has fully degraded.

The following NPCs can repair the armour: