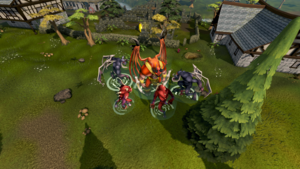 Players attempt to take on the mighty demons

Demon Flash Mobs are a members-only Distraction and Diversion that was released on 28 January 2013. Flash mobs appear every hour in one of 14 locations including the Wilderness. Players with the required combat level get a filtered notice of a surge of demonic energy at a specific location fifteen minutes before the mob spawns, then receive a second message stating that the demons have spawned in that location. Mobs can spawn at any time and are not synchronised across worlds.

Ironman players cannot attack Demon Flash Mobs and will be given the message: You cannot attack a demon flash mob in Ironman mode.

Demon bosses are stronger against players using any sort of prayer or ancient curses, with the exception of Protect Item. If the demon attacks players using prayers, they will do more damage than normal along with having increased accuracy, while ignoring any damage reduction from protect or deflect prayer. Players will be given a chatbox message when the demon damages players using prayers to discourage their usage.

Blood spells from the Ancient Magicks spellbook will heal the demon boss, accompanied by a message from the demon discouraging its use.

A new mob spawns every hour; if the demon general is not slain within one hour of spawning, he will despawn, regardless of the damage dealt on him.

The name of the boss is random. The titles before and after its name will hint at its abilities, as detailed below. This is how the name of the boss will always be shown: "(prefix) (name) the (suffix)", meaning a name such as "General Acidius the Glorious". According to the names shown below, this means this demon boss has very accurate melee attacks and can stun players. Demon bosses of all sorts will use melee and magic attacks. Their magic attacks are multi-targeting, and melee attacks are against one player.

The boss of a demon flash mob will also have a suffix to his name. This suffix determines what special abilities this boss demon has.

A boss demon in a flash mob will have a main name, which can either be aligned to Zaros or Zamorak. This name doesn't have any meaning like titles do. The Zarosian Demon's names shown below are in the Infernal tongue, which resembles Latin. The Zamorakian names are not in any known language.

See Distractions and Diversions/Locations/Demon Flash Mob for all possible locations.

A new demon flash mob will spawn every hour. When it does so, players will be given a notification in the chatbox that states the alignment and the location of the demons. This will spawn an Evil Symbol in the location, which signifies a flash mob will spawn at this location, and will stay for 15 minutes from when it is announced. About a minute prior to an Evil Symbol appearing, any previous demon boss will despawn.

An example of a message broadcast:

News: Zamorakian demonic energy is building up west of Daemonheim!

Both the Evil Symbol and the demon boss will show a demon symbol on the world map, making them simple to locate. Demon bosses will wander like most NPCs, so a demon map symbol moving around signifies that the demon boss is wandering and is unlikely to be in combat.

Some demon flash mobs may spawn in the Wilderness. These demon bosses can drop resources not dropped by mainland demon bosses as well as increased amounts of resources, such as dragonhides or larger stacks of herbs respectively. Players demon hunting should be aware that some areas that the demons may occupy are multi-way, so players looking to fight flash mobs in those locations should be aware of Player killers in groups. It is not advised to bring anything that you are not willing to lose to these demon flash mobs.

In order to receive a drop, the player must deal at least 500 damage to the demon boss in a single hit, once this condition is met a notification will be given to the player. The player must also stay in combat with the boss until it dies to be eligible for the rewards. If the player leaves or dies, the hit of 500 damage needs to be done again to still get a drop. Players will only be able to do this until the boss reaches 1/10th of its total health (40,000); any attempts to initiate combat with a demon boss after this threshold will notify the player they are too late to be elegible for a reward from this fight.

Fighting a flash mob in the Wilderness gives you a greater chance of getting a demon slayer gear drop, and other drops will be worth around three times as much as other spawn locations.

Demon slayer gear is dropped alongside the drop it was going to give you. For example, a player that receives an Off-hand demon slayer crossbow can also get any of the other normal drops it gives.

Outside of the Wilderness[edit | edit source]

Inside of the Wilderness[edit | edit source]

Outside of the Wilderness[d 1][edit | edit source]

Inside of the Wilderness[d 1][edit | edit source]

These are dropped in addition to the above tables.

Not to be confused with Kal'gerion battle commendation.