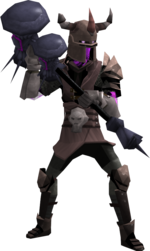 Torag the Corrupted is the second youngest of the six Barrows brothers. Torag attacks with melee and his regular form utilises dual wielded hammers and his shadow form uses a single two-handed hammer. As with all other Barrows Brothers, he should not be taken lightly.

Torag's set effect; Torag's Corruption, causes his attacks to occasionally drain a small amount of adrenaline from a player. This effect is identical to the set effect gained by a player wearing a full set of Torag's equipment. This effect is also accompanied by an animation when activated - a set of purple claws will rise from the floor and clench the player, before sinking back into the ground again within a matter of seconds. This effect is considered more of a nuisance than a lethal effect, as the amount of adrenaline drained is roughly 10% of a full bar and the effect does not occur very often.

Torag, along with his brothers, maintained a small farm. Eventually, Guthan convinced him and the others to join the crusade.

Torag and his brothers made an appearance in Kindred Spirits, where he was chained with Karil, with Guthan attempting to keep balance between the pair and Commander Jaycliff. Torag had intended to join the crusades, being the only one of the six willing to fight. Sliske had set up the games to reveal the secrets of the brothers, but what Torag had kept hidden from his brothers is unknown, as the game was interrupted when Meg failed to impersonate the World Guardian.

During the 2016 Easter event, Torag the Corrupted and his brothers play a role as the workers (bobble-numbskulls) of Sliske's chocolate factory. They resembled their bobble-head versions.

Torag, along with his brothers, appeared in Sliske's Endgame, being the second intended wave in Sliske's attempts to destroy the World Guardian. However, the Barrows Brothers had managed to regain a modicum of control over their own actions, and chose to aid the World Guardian, attacking Sliske's wights and champions.

Torag does not drop his main rewards directly; instead, his equipment is added as possible rewards from the Barrows chest. See Barrows#Rewards for more information. However, Torag can directly drop the following items.