From the RuneScape Wiki, the wiki for all things RuneScape
Jump to navigation Jump to search
Not to be confused with Sir Palomedes.
Padomenes? (edit) 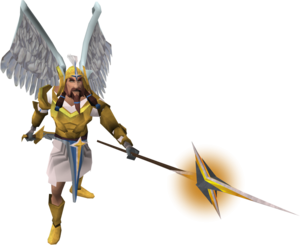 Padomenes is the icyene general in the army of Saradomin who led the Saradominist forces, consisting of White Knights and centaurs, at the Battle of Lumbridge. He would only talk to you if you've obtained a Silver Saradominist token or higher. More speech options were opened up as a player's token was levelled up.

By Padomenes' own account, he was born 'many, many years ago' by human reckoning on the Icyenic homeworld, where he apparently had a happy childhood. He had a sister, Padosan, who always beat him in athletic games, though Padosan noted that Padomenes always claimed to others that he won. Padosan, wanting to embarrass Padomenes in front of a large crowd, challenged him into a marathon, which he accepted. Padosan bested Padomenes in a sprint, but her boast had caused her to crash into an obstacle which cost her her wings, much to Padomenes' horror. Despite this, they maintained a close bond.

He eventually found his true calling as a soldier and enlisted in Saradomin's army. Padomenes quickly proved proficient in the martial arts, though found his true skill lay as a tactician, excelling in the tactical games that were hosted in the city.

As he grew older, Padomenes' devotion to Saradomin also increased. Apparently realising the true glory of the god, Padomenes began taking holy orders, becoming a priest in Saradomin's name; a role which the Icyene retained for many years. For many years, Padomenes travelled the islands scattered across the world, preaching the word of Saradomin to their inhabitants - a simple, but happy, time. Eventually however, Padomenes' martial background led to his ultimate return to the military at the call of Saradomin, who rewarded the loyal Icyene for his dedication by making him a general.

Padosan eventually died of unknown causes; Padomenes mourned her death, as she was taken too young. 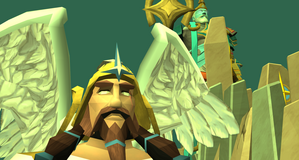 Padomenes, standing by Saradomin during the Battle of Lumbridge.

At some point after Padomenes' promotion, in the year 169 of Gielinor's Fifth Age, the god Guthix - who had ended the first Gielinorian God Wars and barred Saradomin and the other warring gods from Gielinor at the end of the Third Age - was slain by the Zarosian Mahjarrat Sliske, plunging the world into a new Age, and most importantly, allowing the gods to once more return to Gielinor. Saradomin, who was the closest to the world at the time, was the first of these gods to arrive, and along with Commander Zilyana - a legend among the Icyenic people - quickly set to work preparing for the inevitable appearances of other deities, who would no-doubt seek to return to Gielinor as well, and as such, Saradomin remained inactive for the next few months, his return unknown even to his followers, who by that time were the most numerous on the planet due to the rise of the human kingdoms over the past couple of Ages.

However, just as Saradomin predicted, Gielinor soon came to the attention of the other gods. In year 1 of the Sixth Age, Saradomin's great nemesis and rival, Zamorak, emerged from a portal in the forested area west of the town of Lumbridge and quickly began destroying the very earth around him in his attempts to access the remnants of Guthix's power that had accumulated in the area in the form of the Divine tears. Before he could do real damage however, Saradomin appeared - having sensed the chaos god's return to the plane - and engaged his old enemy in battle for the first time since the last God Wars, resulting in the obliteration of the surrounding forest and creation of a large crater teeming with divine tears. Despite the mighty clash, however, it became apparent that Saradomin and Zamorak were equally matched, and only with supplementing their powers with the divine tears could one overcome the other.

Erecting great structures around them, the two gods began summoning in their armies to battle with one another and gather tears for their respective lords. It was at this point that Padomenes was summoned, chosen by Saradomin to lead his forces to victory against those of Zamorak and his Mahjarrat half-breed general Moia. For the duration of the battle, Padomenes could be found at the Saradominist camp overlooking the battlefield, determined to bring victory for his god.

After the Battle of Lumbridge ended, Padomenes simply disappeared. It is quite likely that he teleported away with Saradomin after the wounded Zamorak escaped.

On 17 December 2016, an eclipse happened. After it Padomenes could be found in the courtyard of White Knights' Castle training Saradominist crusaders.

Padomenes was unaware that Everlight resurfaced, having been busy training Saradomin's armies. When the World Guardian approached him with a gold Dominion medal, he was surprised to see it in their possession and asked them how they acquired it. He was shocked to learn that Everlight had risen up from the sea, and learned that they had found the medal from a statue of Padosan. He requested that they hand it to him, so he could cherish the memories he had with his sister. Upon doing so, Padomenes informed them that in order to claim Everlight's magic, they would need a kantharos cup.

When the World Guardian, Sir Upticious and Sir Owen were seeking an audience with Saradomin, they met with Sir Amik Varze. Amik would help the trio if Padomenes had given his seal of approval for the latest batch of recruits. Greeting Padomenes, he was informed of the situation but told them that although he admired the recruits' devotion, their equipment was in such poor shape that they needed to be given new equipment before he would do so. He sent them off to Sir Vyvin, but Vyvin refused to give them better equipment until Saradomin had blessed it.

He later attended the touching of the crown ceremony hosted by Saradomin and watched as his god's crown was reclaimed by Zaros.