From the RuneScape Wiki, the wiki for all things RuneScape
Jump to: navigation, search
The Old School RuneScape Wiki also has an article on: osrsw:Dharok the Wretched's equipment
For other variants of this item, see golden, lucky. 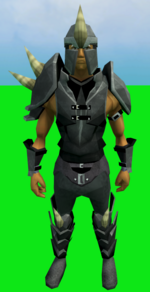 A male player wearing a full set of Dharok's equipment

A female player wearing a full set of Dharok's equipment

Dharok's Might: Melee attacks have a chance of dealing additional damage based on the percentage of health the user has remaining. The damage scales linearly from half health to one hitpoint. An Amulet of the forsaken can be worn, making the effect scale from full health to one hitpoint. Every damaging ability has a 25% chance to activate Dharok's Might. Basic abilities can deal up to double damage, while threshold abilities deal up to 140%, and ultimate abilities 110-120% respectively.

Dharok's Might is always calculated on a player's base life points. This is equal to 100 times their constitution level, and is not affected by any buffs, such as bonfires or the Powerburst of vitality.

It is possible for players to damage themselves to take advantage of the set effect.

Input your current and maximum (unboosted) hitpoints to get the damage multiplier. These are estimated values and not official formulae.

There are two ways to repair Barrows armour. Players can talk to any of the NPCs listed below and they will repair the items for a price, or repair the pieces themselves using an armour stand in any player-owned house for a reduced cost based on their Smithing level. The equipment can be repaired at any stage, and the cost will be adjusted according to how much it has degraded. The repair costs below are as if the equipment has fully degraded.

The following NPCs can repair the armour: