From the RuneScape Wiki, the wiki for all things RuneScape
Jump to: navigation, search
Loading...
NPCCombat
RelomiaRelomia, Emissary of Sliske? (edit) 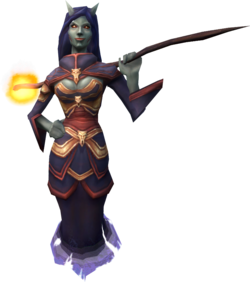 Relomia is the emissary of Sliske. She can be found in Draynor Village, although she is originally from West Ardougne. There, she was a simple housemaid until she miraculously stumbled into the Shadow Realm and somehow got stuck there. After years, during which her appearance was significantly altered, she encountered Sliske, who rescued her, likely with ulterior motives. Relomia, upon hearing of Sliske's slaying of Guthix, proclaimed him to be a deity. Sliske himself, however, does not care about Relomia's actions and does not have, or seek, godhood.[1][2]

According to Relomia, those who choose to follow Sliske will be helped through the dark times. If one opts to pledge allegiance to Sliske by talking to Relomia, she will give various tasks to complete. Relomia will also hand them a banner of Sliske and a Book of the Gods. The title "[Name] of Sliske" may be activated through this emissary. The banner may be used to contact Relomia any time, and receive new tasks.

In the quest Missing, Presumed Death, Relomia makes a small cameo at the Empyrean Citadel, stuck on top of a rock. She is seen looking for Sliske, and insists she was invited. In the quest's sequel, Kindred Spirits, she informs the player that Sliske has been captured by Dragonkin, though this turns out to be a ruse. In the quest series' finale, Sliske's Endgame, she is the starting point of the quest. She is the focus of the Foreshadowing miniquest, where she steals the player's identity and is later tricked into giving it back. During Flashback she steals and alters a a stack of biographies that belong to Closure and makes changes to several biographies, resulting in Merlin, Ava and Ozan being sent to Closure's office as dead, until their histories are restored. In Fortunes, the player works with Closure and Death to prepare a quest for Relomia to help her feel like a hero and rethink her ways.

Relomia was graphically updated as a hidden update a week before the release of Sliske's Endgame.

Transcripts Relomia, Emissary of Sliske is the author or co-author of: