From the RuneScape Wiki, the wiki for all things RuneScape
Jump to navigation Jump to search
This article is about the information tab. For monsters described as beasts, see beast. 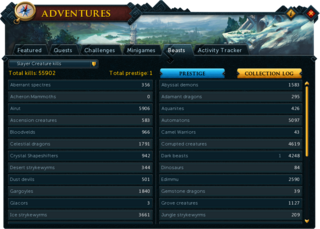 The Slayer creatures display with 1 prestige on Dark beasts

The Beasts tab contains an overview of all non-quest repeatable bosses in-game, counting how many you've killed and how fast you killed them. It also contains a detailed overview of how many times you killed the most popular slayer creatures. It caps at 60,000 kills. Starting from 2 November 2015, after the cap has been reached, it can be reset to 0 to gain 1 prestige for that monster. This has a cap of 255, allowing 15,360,000 kills to be recorded. The Quick Chat option has a cap of 15 prestige before displaying LOTS!, allowing 1,020,000 kills to be recorded.

As of 9 March 2015, the Beasts tab also has a "Learn" tab under each boss shown. This tab shows an overview of their unique abilities/attacks and if possible, how to avoid them. You can click on the eye on the right side of the description to see the boss using the animation for that ability/attack.

The list of slayer monsters that the interface keeps track of kills for are:

The list of bosses that the interface keeps track of kills for are:

Note: Bosses with hard mode options have a red skull alongside the normal skull as an indicator. In Elite Dungeons solo kills are considered hard mode kills. For Solak the duo encounter is considered a hard mode kill.