From the RuneScape Wiki, the wiki for all things RuneScape
Jump to: navigation, search
This article is about the boss. For other uses, see Croesus (disambiguation).
Croesus? (edit)? (edit) 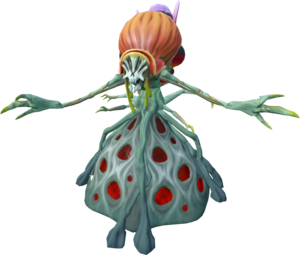 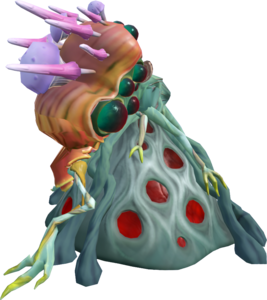 Croesus is a giant fungal boss, part of the Croesus Front in the Elder God Wars Dungeon. It was revived by Bik in the Senntisten graveyard in order to attack the forces defending the cathedral from the Elder Gods.[1][2]

Croesus is the game's first skilling boss. Having at least level 80 Construction, Fishing, Hunter, Mining, and Woodcutting is recommended when engaging the boss, although these are not required. Players cannot die while facing Croesus, instead, they will be removed from the arena if their stats are completely drained.

Despite being a skilling boss, Croesus does have all the features of a regular boss. In order to be assigned Croesus for Soul Reaper, the player must enable receiving skilling boss assignments in the Soul Reaper settings. Unlike the other bosses in the Elder God Wars Dungeon, Croesus does not have a hard mode variant.[1][2]

Obtaining all of the unique drops from this boss completes the achievement Some Fungi are Only Edible Once, unlocking the title, [Name] the Infected.

Croesus is located at the graveyard of Senntisten, east of the Cathedral.

Croesus cannot be killed, and needs to be put to a dormant state. To do that, the players need to clear fungus from the trophy carcasses of four beasts, found near the graves of four heroes from the Second Age. Clearing out the graves reduces Croesus' strength. However, the fungus can grow back, which can be slowed by using the collected rotten fungus. After collecting enough materials, the players can restore four statues of the heroes, and pray to them to temporarily subdue the boss. This grants access to Croesus' fungal core for a period of time. Once this core is destroyed, the encounter ends.[1][2][3][4]

Croesus does not directly damage players, instead they possess a blue health bar, signifying their skill levels. If this bar empties, the player is removed from the encounter. This health can be restored with potions and other stat-boosting items, and the drain can be reduced by wearing the shadow pontifex ring upgraded with resonant anima of Bik. Higher levels in respective skills, better tools, and elite skilling outfits are all beneficial during the fight. The player's contributions in subduing Croesus determine the amount of experience and rewards obtained - masses provide faster kills, while smaller groups provide better experience and rewards.[1][2][3][4]

During the Second Age, shortly after the end of the Kharidian Campaign, a Praetorian expedition that had been sent to the Unquiet Ocean returned to Senntisten with a very unusual species of fungus. They intended to use it as a biological weapon against the Zarosian Empire's enemies and as political leverage.[5]

In their laboratories, they were able to turn the fungus into a being which they called Croesus and experimented on it, feeding it slaves, burning away weaknesses and continually evolving it. This was done so well that Croesus was eventually able to break out of containment and into the city; while the breach was considered serious, it didn't appear to cause much havoc. They were then ordered to stop experimenting on it.[6]

This order was ignored - Croesus, now even stronger than before, broke out of containment again and was able to infect one of the city's districts, feeding on organic matter to empower itself. The Tenth Legion was recalled from the Empire's borders to combat the fungus. Gorvek, along with the legion, razed miles of city in an attempt to contain it, but they were unsuccessful. The legion was almost wiped out, forcing Zaros to personally intervene. He quarantined the district by burying it beneath the earth. [7] Zaros' intervention prevented it from spreading further, but it had already killed 50,000 people by the time it was stopped, creating such an impact that Zarosians called its rampage the "year of Croesus".[8] Without new hosts to infect, Croesus either died or fell into a dormant state.[9]

Croesus' rampage would soon be a distant memory by future Zarosians, who thought of it as legend or nonsense. Only Yokai, a Zarosian witch, appeared to be aware of the existence of Croesus and was prompted to dig at the graveyard to unearth it for reasons unknown.[10]

In the Sixth Age, Bik found Croesus beneath the graveyard of Senntisten and revived it, commanding it to reclaim the Elder God eggs. It massacred the troops of the Varrock and Lumbridge Guard that were stationed at the graveyard by Seren.[11] Fortunately, the World Guardian and their allies were able to turn Croesus' fungi against it, preventing it from growing too strong.

Rewards for subduing Croesus are determined based on the player's participation in the encounter, which includes the following:

Some actions can also decrease the player's contribution and should be avoided:

At the end of a successful encounter, the player's contribution factor is displayed in the chatbox. This factor determines how many times the reward table is rolled at the end of the kill. With at least 419 contribution, the player receives a maximum of 12 loot rolls; this does not include secondary rewards. Higher contribution also increases the amount of Croesus flakes awarded to the player. It is possible, although unlikely, to obtain multiple unique items from a successful encounter, as both a group and individual.

Rewards are placed in the chest near Gorvek. They can be accumulated from multiple kills, as long as the player does not exit to lobby or log out of the game. If they do so, the rewards will be sent to the bank - if the bank is full, items are sent to the player's inventory. If the inventory is also full, then the items are lost.

All drop quantities are per individual roll, not in total. This also applies to Croesus flakes.