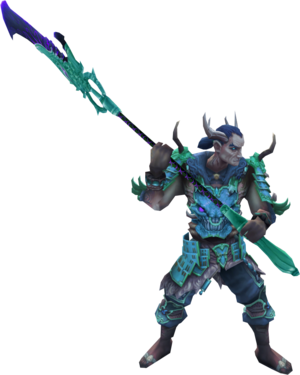 Masuta the Ascended is the second boss of the Temple of Aminishi elite dungeon. He is a member of the Council of Seven, who are essentially the Acolytes of Seiryu's leaders.

Shrine Maiden Elei has high praise for Masuta, commenting on his ability to defeat twenty acolytes bare-handed and would be content enough to even achieve a fraction of his power. Lady Himiko soon had a vision sent by Xau-Tak, who relayed it to the other members. Due to their beliefs, the Acolytes of Seiryu joined Xau-Tak. Masuta later met with The Ambassador and joined forces to bring it onto Gielinor. However, Masuta was soon slain by the World Guardian while attempting to hide Seiryu the Azure Serpent's corruption, who explored the temple at Bryll Thoksdottir's request.

Masuta would not remain dead for long, as he was eventually revived by the Ambassador's allies, although as a spirit. He would be slain again by the World Guardian and their allies who besieged the temple to stop the ritual.

In normal mode 2 drops are rolled: the 100% drop and a common mob drop. In story mode Himiko's Vision is the only drop; however its drop rate is higher compared to normal mode.[1]

Masuta drops onyx dust, unless his warspear or Himiko's Vision is dropped, which replaces the dust.