From the RuneScape Wiki, the wiki for all things RuneScape
Jump to: navigation, search
This article is about the boss monster on Mazcab. For other uses, see Beastmaster Durzag (disambiguation). 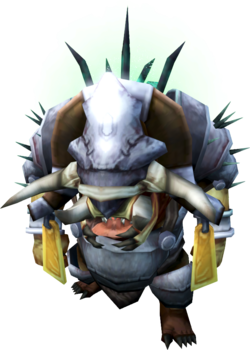 Beastmaster Durzag is the first boss of the Liberation of Mazcab raid. He is an airut who, along with the Shaman, has amassed powers greater than an airut normally would, according to the Fifth stone fragment.

Beastmaster Durzag can be looted once every 2 days for rewards including the superior versions of Teralith, Primeval, and Tempest equipment. Starting the encounter requires challengers to form a raid group with the Grouping System to enter the instance.

Killing Beastmaster Durzag for the first time grants 250 reputation with the goebies.

Obtaining all unique drops from Durzag and Yakamaru will unlock the title, [Name] the Liberator.

Beastmaster Durzag does not appear in the fight initially; players must first free the goebie in the middle of the arena to start the fight. Once freed, a wave of enemies consisting of Chargers, Airut, along with Cormes, one of Durzag's pets, will attack the group. Once all of them are cleared, Durzag will appear with one of his pets, either Krar or Tuz, before he calls for the other one sometime later during the fight. Chargers will also appear in small pens when this happens; the pens can be opened to fight the Chargers before they swarm at nearby players when they are all released at once by Durzag.

Krar and Tuz should be separated from Durzag, to reduce the amount of damage Durzag can deal.

Every wall also has a broken gong in it, which can be repaired; however, it takes a while to construct when doing it alone. When Durzag is nearby, it can be rung one time only, halving his attack speed and draining the player's prayer points entirely.

Occasionally, he throws bombs, mobile explosives which follow a player before exploding. They deal 2,000 magic damage to nearby players upon explosion and reset all defensive abilities.

When Beastmaster Durzag is killed, his corpse remains and acts as a reward coffer to collect the drops. Durzag has several drop tables that are rolled on to constitute the loot. Airut bones are always received, the consumable table is always rolled, summoning charms are commonly received, and tertiary drops may be received. If the unique drops table rolls either a Mazcab ability codex or piece of achto equipment, the main drop will not be received. If the unique drops table rolls teci, the main drop table will be rolled multiple times.

This drop table is accessed only if no Achto armour or Mazcab ability codex is received.[r 1]

Only one burial charm may drop at a time. Lil' Tuzzy cannot be received if the player has already unlocked it. The burial charm table, effigy table, and pet table are not linked - a player may receive drops from one, two, all three or neither.

Beastmaster Durzag can only drop one item from this table. If no armour piece or Mazcab ability codex is dropped, the player will receive teci.

The drop rate of any piece of Achto Primeval, Tempest, or Teralith equipment is doubled if the respective non-achto equipment piece is purchased from the Goebie Armoursmith.[1] For example, buying the Teralith Helm will double the chance of getting the Achto Teralith Helm.

A player that owns all fifteen pieces of achto equipment may continue to receive achto armour as drops with the following changes to drop mechanics:

Progressing in the drop order requires collecting all three of the previous equipment slot's achto equipment - so in order to receive an Achto Primeval robe top, they would have to get all Achto Tempest, Primeval, and Teralith boots, gloves, helm and legs. The Achto equipment gained from each equipment slot is based on the combat style the player dealt the most damage with during the kill they obtained that armour; if the equipment piece corresponding to the used style is not owned, that is always gotten before the others, and otherwise there are equal odds of obtaining armour corresponding to one of the unused styles.[m 1]

When killed in the wilderness with achto armour, it will drop a specified amount of coins if you die.