From the RuneScape Wiki, the wiki for all things RuneScape
Jump to navigation Jump to search
For the achievement, see Telos (achievement).
? (edit) 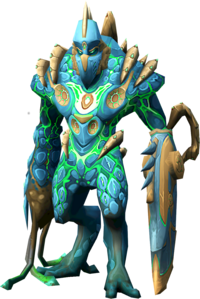 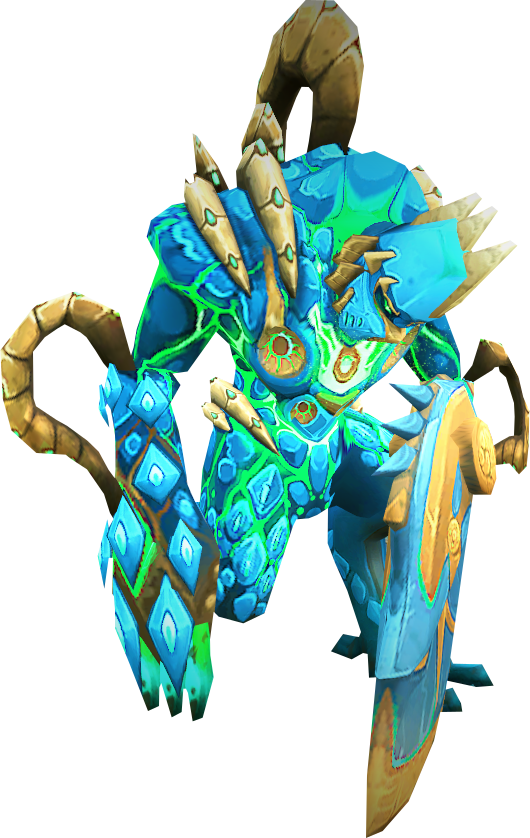 Telos, the Warden is an anima construct residing in the Heart of Gielinor. Due to the fighting above, Telos is slowly beginning to awaken. However, Telos is only interested in protecting the Heart, and not Gielinor as a whole. Realising the threat it may cause to the inhabitants of Gielinor, Soothsayer Sybil sent the World Guardian to stop Telos before it becomes too powerful.

It is billed as the toughest solo boss monster in RuneScape. Its chamber is accessible through a large "tree" like structure in the middle of the dungeon.

To fight Telos, players first must obtain an ancient sigil. The four components of the sigil can be obtained by killing all the generals in the Heart at least once; therefore, there is a minimum of 80 Attack, Prayer, Magic and Ranged (all of which may be boosted) required to reach Telos. The components are always a guaranteed drop, but only appear to the player who dealt the most damage to the boss. Once used on the door in the middle of the dungeon, it will be consumed and give the player permanent access to the boss chamber.

Killing Telos is a possible Soul Reaper assignment. The assigned number of kills can vary between 2 and 8.

Deathtouched darts work against Telos, clearing one phase for each dart used. They may be used to achieve the trimmed completionist cape requirement, along with increasing enrage, although they will not work for obtaining any of the Warden titles.

Obtaining all of Telos's unique drops will unlock the title, [Name] the Dormant.

Right clicking the roots leading into Telos's arena gives the player the additional options to use the last custom enrage and to enable or disable colourblind mode.

The music track Anima is unlocked by entering Telos's arena.

While fighting Telos at under 100% enrage, the player will progress through four phases, each of which - upon successful completion of the phase - involve Telos and the player gradually descending down platforms into the Heart of Gielinor. If Telos is encountered at an enrage level of 100% or greater, the fight is extended to five phases, the last of which involves mechanics abstracted from all four phases preceding it.

Telos's difficulty is scalable: players are able to choose the fight's difficulty which affects both its strength and potential reward value.[1] To do so, the player must successfully defeat Telos at an enrage level greater than 0% (see below). Then, when initiating a confrontation with Telos, the player will receive an interface in which they may select a custom enrage level (between 0% and the highest enrage level on which they successfully scored a kill plus 5%). Players can obtain all of Telos's unique drops at any enrage (see drops section below).[2] As he gains enrage, its combat level, life points, and damage inflicted increase.

All forms of teleportation are blocked during the fight, making it a fight to the death. Attempting to teleport out displays the message A magical force prevents your teleport!.

Telos has a special drop interface compared to other bosses possessing such a feature (e.g. Araxxi). It possesses three "tiers" of drops; Bronze, Silver and Gold. These tiers affect the chances of which a unique drop can be obtained, but otherwise it generally has no actual effect on the chances of common drops. Telos will always drop loot upon defeat. Upon receiving loot, players have the option to continue the challenge, or claim the rewards. This must be done after each kill, as the game will prevent the player from fighting Telos again until this is completed. Claiming the rewards will immediately send all rewards to the bank (money pouch for coins), and reset both Telos' enrage and kill streak to 0.

Continuing the challenge will cause Telos to gain anywhere from 5-20% enrage, which is added onto the next battle with it. This makes the next fight harder, but also increases the effective profit from each successful kill for both common and unique drops. Subsequent challenges continue to stack new enrage to the current stack, capping at a total of 4000%. Logging out does not reset the killstreak. This process can be continued as long as the player wishes, though there is a cap of 200 kills that can be "stored" in the trove; if the player attempts to defeat Telos more than 200 times in a given killstreak, the game will prevent you from fighting Telos until you claim your rewards.[3]

Although the player may teleport out of the arena following Telos' defeat, the player must claim their loot or continue the challenge in order to do so; attempting to do so beforehand will prompt the Trove of Telos interface to appear. If players right-click the anima stream to leave the arena, they must interact with the font at the lobby area instead.

Telos' drops are only affected with the luck of the Dwarves or Hazelmere's signet ring. Unlike other bosses, the aforementioned rings can be brought in at any time, and as such it's important to equip it before claiming your rewards to avoid missing out on unique rewards the ring may influence.

If the player dies while fighting Telos, then Telos will "reclaim" some of its rewards. As players increase their killstreak, they will retain more of the rewards upon death; this starts at 5%, and increases by 5% every successful kill afterwards up to 75% at 15 kills. This reduction applies by whole numbers of the items held in the chest, not the total value of rewards. For example, if the player possesses 16 uncut onyxes in the chest but dies with a killstreak of 58, then 4 of these onyxes would be lost, while the other 12 would be kept by the player.

The player must claim their rewards from the font if they are killed fighting with Telos, as the game will prevent them from fighting Telos otherwise.

The drop rate of the unique items is dependent on Telos's enrage and killstreak; the higher these two values are (especially the latter), the higher the chance a unique drop will be rolled upon defeating Telos.

It was worked out by the players that the equation for the unique item drop rates could be:

is the enrage of Telos,

is the number of total kills done in the streak (so Streak+1 if using the Streak value in the loot interface), and

is either 25 or 0, depending on whether the chest was looted with Luck of the Dwarves worn or not.

The validity of this formula remains unconfirmed, but it matches the known drop rates at different streaks and enrages revealed by Mod Timbo up to certain enrage. The equation was discovered by noticing that the drop chance increases linearly at different enrages at a constant enrage (i.e 10% each kill). The streak's factor in the equation was deduced by assuming a similar linear increase in the drop chance, and by being then able to predict the known drop rates at different streaks.[4] This formula has further been updated based on information revealed for Arch-Glacor (hard mode), which uses the Telos streak system. Player sourced samples suggests that the drop rate caps at 1/15 for uniques.[source needed]

Using this equation, it appears that the best strategy for making money would be streaking from 100% enrage to the highest enrage that Telos can be consistently defeated.

When the unique item table is rolled, the player has the chance for the following:

This calculator along with documentation can be found at the top of this page.