From the RuneScape Wiki, the wiki for all things RuneScape
Jump to navigation Jump to search
The Old School RuneScape Wiki also has an article on: osrsw:Boss
This article is about the powerful class of monsters. For other uses, see Boss (disambiguation). 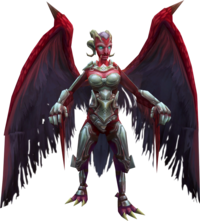 A boss is a powerful, usually unique monster that is fought to accomplish an objective, be it the advancement or completion of a quest or minigame or as part of a team player versus monster event. Many quests feature boss fights at their climaxes; such bosses are often the main antagonists of the quests or quest series or are somehow related to the main antagonist(s).

Some monsters that are commonly referred to as bosses are very powerful monsters that are commonly fought by teams of players in search of highly valuable drops. Many bosses have extremely high combat levels, and all of the strongest monsters in the game are bosses. Bosses are typically immune to a combination of either stun, poison, or reflect damage. Even fewer bosses are immune to a combination of leeching effects (from the Ancient Curses) or status abnormalities (defence drain (not affinity value) or damage increasing hexes), generally recovering from the latter very quickly.

Dwarf multicannons often cannot be set up in the areas of many bosses. Others may have different restrictions; for example, only black equipment may be used to fight the tormented wraith, and Prayer cannot be used during the fights with the final bosses of Recipe for Disaster.

Since the introduction of Kerapac, the bound, all updates that introduce new bosses to the game start a week-long event where Death provides free item reclaims and a ring of death doesn't lose charge upon dying. The event ends at noon seven days after the update that introduces the boss.

For each warring deity in the God Wars Dungeon, there is a very powerful leader commonly referred to as a "general". Each general also has three bodyguards, one of which uses each style of combat: Melee, Magic, and Ranged (with the exception of Nex, who has four bodyguards and all of them use magic). In addition to the 60 Strength or 60 Agility required to enter the God Wars Dungeon, each general's encampment has further requirements to enter.

Nex drops tier 80 armour and weaponry, Nex (Angel of Death) drops tier 92 weaponry and tier 99 prayers, and the generals drop tier 70 armour and tier 75 weaponry. Apart from Nex, each of these generals also has a unique hilt to make their version of the Godsword, which has various effects.

With the exception of Telos, all the generals drop Dormant anima armour, which can be powered with a god crest (obtained from killing the bosses) to create level 80 power armour, which can be upgraded into level 85 by using essences, which are also dropped by the bosses. They also drop unique level 85 weaponry, which has the power of a level 80 weapon but the accuracy of a level 90 weapon.

Located within an intact portion of the city of Senntisten, the Elder God Wars Dungeon follows the narrative continued from the City of Senntisten quest. With the player's help, Azzanadra has moved the eggs of the Elder Gods to a cathedral within the city, where Armadyl, Zamorak, Saradomin and Seren are attempted to draw out their anima to prevent them from hatching. In response, the four Elder Gods–Jas, Ful, Wen and Bik–have sent their forces to reclaim their eggs, and if they succeed, they will most likely precipitate The Great Revision, destroying the entire universe.

Unlike the previous two God Wars Dungeons, the four "fronts" of the Elder God Wars Dungeon were not made available all at once. Instead, they were released in monthly updates starting with Jas' army, the Nodon Front, and ending with Ful's army, the TzekHaar Front. The dungeon also differs by having no killcount or skill requirements to face the bosses within, and the generals each offer a different style of combat challenge.

The three elite dungeons; the Temple of Aminishi, Dragonkin Laboratory, and The Shadow Reef have three bosses in each dungeon. Each boss is fought in order as the player(s) progress deeper into the dungeon.

The Legiones are extremely powerful members of the Order of Ascension. They may only be fought with 95 Slayer after their respective Keystone is obtained, which are dropped by other members of the order, and they themselves are capable of dropping them. While they are usually fought alone, two players can kill them together (through social slayer) and they are level 304, each having a special ability that makes them different from the rest, although they are all capable of throwing electricity on the floor, similar to Commander Zilyana in hard mode. They are capable of dropping signets for the Ascension crossbow and the Off-hand Ascension crossbow, level 90 dual-wielded crossbows. All of the Legiones count for ascension members slayer tasks.

The Rex Matriarchs are three powerful female rex dinosaurs that were enhanced by Kerapac by the addition of various traits grafted from Raksha. Their lair is located in the Spirit Grove on Anachronia, which can be accessed via a teleportation device on the east side of the grove. At level 888, they are considered to be the spiritual successors of the Dagannoth Kings and share many similarities, however, the Rex Matriarchs possess unique mechanics, attack with two different combat styles each, and have extremely high resistance to combat styles they are not weak to instead of complete immunity. Like Raksha and unlike the other dinosaurs on Anachronia, they have no slayer requirement to be fought. However, the Rex Matriarchs count for dinosaur slayer tasks.

All three dinosaurs drop four different pieces of Laniakea's spear, a tier 82 halberd-range spear with tier 75 accuracy and tier 90 damage that is inherently poisonous and boosts poison damage by 5%. They also drop hearts which can be combined with 10 of each of the rings dropped by the Dagannoth Kings to form much stronger rings with passive effects. All three can drop the Heart of the Berserker, which can be combined with 10 berserker rings to create the reaver's ring, a hybrid ring that boosts critical strike chance by +5% at the cost of -5% to hit chance. The other three hearts are dropped exclusively by specific dinosaurs. They are also able to drop unchecked eggs for the Anachronia Dinosaur Farm.

Three level 303 Dagannoth Kings lair deep under Waterbirth Island. Altogether the Kings drop several unique items, such as Seercull, dragon hatchets, berserker rings and mud battlestaves. They also drop a variety of Fremennik-related arms and armour, such as archer helms and skeletal armour. They all count as Dagannoths for a slayer task.

Raids are sequences of boss fights. Currently, the only raid is Liberation of Mazcab.

Bosses that are fought during a minigame.

The Balance Elemental, guardian of the Stone of Jas

A large number of quests involve and/or conclude with a battle against a powerful monster, which often is or is related to the quest's main antagonist. Except where otherwise noted, these bosses cannot be fought once their respective quests have been completed. However, many of them could be fought after in the Dominion Tower, after some other requirements have been met.

The Armour of Trials set earned from spending quest points at May's Quest Caravan provides +1% damage reduction per armour piece worn per death against quest bosses, up to a maximum of 5% per piece, or 25% damage reduction for the full set worn. In addition, the Vanquish weapon gains a +5% damage boost against quest bosses per death, up to a maximum of 25% with 5 deaths.

A sub-boss is a powerful or semi-powerful monster fought as a prelude to the actual boss fight.

The Culinaromancer, the evil culinary sorcerer and main antagonist of Recipe for Disaster. 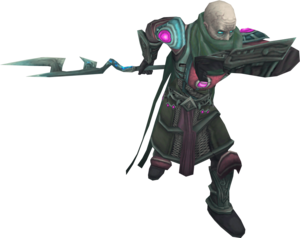 Nomad, the scourge of souls, and the final boss of Nomad's Requiem and Nomad's Elegy. 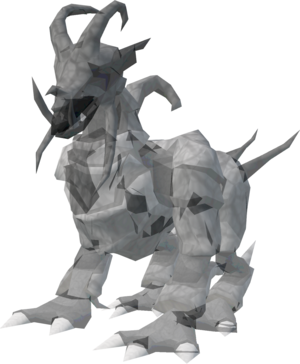 The Spirit Beast, terror of the Spirit Realm.

Some quests have several boss monsters that must be defeated, usually one after the other. 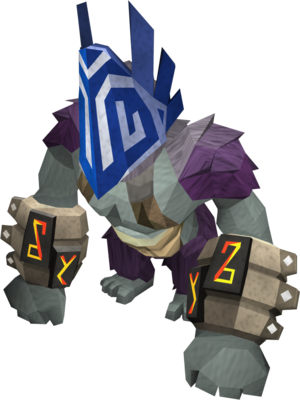 On 1 November 2011, Jagex released the Dominion Tower, a minigame that allows players to fight bosses from quests they have completed. Players can fight up to 60 unique boss monsters from previous quests, including Nomad, the Pest Queen, Zenevivia, the Balance Elemental, and many others. 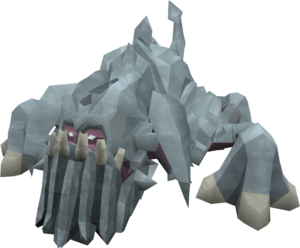 The gluttonous behemoth, a boss found during Dungeoneering.

At the end of each floor of Daemonheim is a powerful boss monster that must be defeated in order to complete the dungeon. The levels and strengths of these bosses vary according to a combination of factors, including the dungeon's size and complexity rating, but they will otherwise always have the same qualities. Kal'Ger the Warmonger is the strongest in Daemonheim.

On 28 July 2014, Jagex added a new mechanic to the game called Enrage, alongside the bosses Araxxor and Araxxi.

Enrage increases the damage dealt by the bosses, from both auto-attacks and special attacks.

Araxxor and Araxxi increase their enrage throughout the fight via various mechanics. After killing and looting Araxxi's corpse, the next fight with the pair will add an additional 20% enrage to the fight, stacking with every kill afterwards, capping at 300% (although additional enrage can still be obtained during the fight). Enrage also affects the drop rate of the araxyte pheromone and araxyte pet, although the latter is only affected by enrage gained during the fight. An araxyte pheromone can be broken to reset their enrage level back to 0%.

On 27 June 2016, another boss with enrage, Telos, the Warden, was released. Telos' enrage functions similarly to Araxxor and Araxxi's, but with additional functions. Although the auto-attack scaling is significantly weaker (as a 300% enrage Telos deals far less damage than Araxxi), the damage dealt from his special attacks scales significantly higher in response. Various mechanics are added and/or modified as his enrage increases (such as a final phase in encounters of 100% enrage and higher). The higher Telos' enrage is, the more likely a unique can be rolled, although streaks still play a higher role in the drop rate. Telos does not possess any mechanics that increase his enrage during the fight; this is only applied whenever the player continues their streak after each kill, with a 5-20% enrage stack accumulating to the current level of enrage.

While not technically enrage, Beastmaster Durzag, Yakamaru and Nex: Angel of Death also possess enrage-like mechanics in the form of stacks, although the latter also possesses a passive enrage mechanic throughout the fight. The Liberation of Mazcab bosses' enrage can cause increased damage; Durzag's stacks are applied on the target he is focused on, while Yakamaru's stacks are applied on anyone in front of it as it attacks; the former causes defensive resets, while the latter has a damage multiplier. These may be halved by using Freedom.

Nex's enrage stacks are only focused on the target she is on, although obtaining numerous stacks will cause defensive abilities to reset. Freedom does not reduce her stacks; instead, they are removed when she has not attempted to use melee on her target for a prolonged period of time.

On 31 August 2021, the Arch-Glacor was released, with enrage and streak mechanics largely similar to those of Telos.

During certain boss fights, the player is prevented from using teleports to escape. In the case of Telos and Arch-Glacor, this is to prevent players from teleporting out to preserve their killstreak.