From the RuneScape Wiki, the wiki for all things RuneScape
Jump to navigation Jump to search
The Old School RuneScape Wiki also has an article on: osrsw:TzHaar Fight Cave
For the minigame in which players fight against each other, see TzHaar Fight Pit.
"Fight Cave" redirects here. For its tougher sequel, see Fight Kiln.

The TzHaar Fight Cave is a combat minigame located in TzHaar City. It involves single-handedly fighting off 62 waves of TzHaar creatures, not including a boss fight against one of the strongest monsters on RuneScape: TzTok-Jad, with a combat level of 702. Players will be rewarded with Tokkul for playing this minigame, and if they manage to defeat TzTok-Jad, they will be rewarded with the fire cape: the fourth strongest cape in the game after the Igneous Kal , the TokHaar-Kal, and the Max cape. Completing the entire TzHaar Fight Caves gives about 130,000 experience in combat skills and about 45,000 experience in constitution, giving roughly 175,000 experience total for completing the fight caves, including Jad. This is a safe minigame, as you will keep all your items if you die. However, you will not keep the ammo, food, and potions already used when you die, so doing the fight cave is not cost free.

Up until the release date of this minigame, the Kalphite Queen was the most powerful creature in RuneScape. The TzHaar Fight Cave introduced 2 higher-level monsters: TzTok-Jad and Ket-Zek, though the Kalphite Queen is widely regarded as more difficult to defeat than the Ket-Zek. TzTok-Jad was the strongest monster in the game for three years, until the release of the Corporeal Beast. Many higher-levelled monsters have been released since, but TzTok-Jad is still one of the strongest monsters in terms of offensive powers, being able to one- or two-hit players. In February 2012 the Fight Kiln minigame was released, which introduced a stronger version of Jad: the TokHaar-Jad.

Familiars and pets are banned from the fight caves. Saving progress or taking breaks, can be done by logging out between waves.

The entrance to the Fight Cave 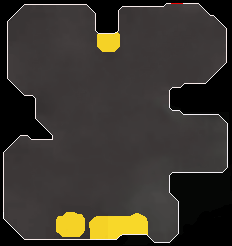 A map of the Fight Cave

The Fight Cave is located in TzHaar City, deep under the ground of Karamja. First of all, the player has to travel to Karamja. There are a few ways to do this:

If using one of the last 3 options the player then has to make their way to Karamja volcano, east of Brimhaven and west of Musa Point. There are two dungeon entrances at the top of the volcano, the large entrance at the centre of the lava lake leads to the TzHaar City. Once inside, walk north and then turn west just before you reach the small summoning obelisk, look for the bank and minigame symbol on the minimap. This is the entrance to the Fight Caves.

In this minigame, players must battle past waves of 6 types of monsters ranging from level 22 up to level 360, before facing the final boss, the level 702 TzTok-Jad. Each of these monsters require a different tactic by the player, though, due to the structure of the minigame, most of them are best fought from a distance. The monsters generally have high Attack and Strength, along with a special ability, but low life points and Defence. This means they will hit hard and often, but can be killed quite easily.

Monsters in the Fight Cave can be seen as representing powers of two minus one: each wave, monsters will spawn whose place values sum to the wave number, with the Tz-Kih(22) being worth 1, the Tz-Kek(45) 3, the Tok-Xil(90) 7, the Yt-MejKot(180) 15, the Ket-Zek(360) 31, and finally, the Tz-Tok Jad(702) 63. However, waves in the Fight Cave prefer to spawn high-level creatures (e.g. wave 31 spawns one Ket-Zek instead of 31 Tz-Kihs). For example, consider wave 47 as having 47 points: a Ket-Zek with a point value of 31 spawns, because that is the highest creature whose point value can fit in 47; then, of the remaining 16 point, a Yt-Mejkot with a value of 15 spawns, and a Tz-Kih spawns with the remaining 1 point. Thus wave 47 consists of one Ket-Zek, one Yt-MejKot, and one Tz-Kih. The final wave of the Fight Caves is wave 63, in which one Tz-Tok Jad, with a value of 63, spawns.

The monsters are in order of appearance by wave number:

TzTok-Jad is the final monster encountered in the Fight Cave. Examining it yields the discouraging message "This is going to hurt...". TzTok-Jad is a level 702, huge, four-legged behemoth and uses all three sides of the combat triangle - magic, ranged and melee. TzTok-Jad will not attack with melee unless the player is adjacent to him. There is no setup animation for TzTok-Jad's melee attack. When the player is in melee range, TzTok-Jad will still use Magic and Ranged attacks as well.

Although somewhat slow, all of these attacks can deal enough damage in a single blow to kill even the most powerful of players if not guarded against via using the correct protection prayer, as TzTok-Jad has a maximum hit of 6280+ and hits very accurately.

Since the release of Kuradal, players may now receive Tzhaar creatures as Slayer tasks. Upon receiving the assignment, Kuradal will offer a player the option to upgrade the task to "280 volcanic creatures of the Tzhaar Fight Caves." Defeating TzTok-Jad on this special assignment will give a bonus of 25,000 Slayer experience, the largest amount of experience to be gained from any monster. Additionally, going through the whole Fight Cave on this alternative task may yield up to 77,523 Slayer experience. This consists of all waves up to 63, including killing eight Yt-HurKots (two waves) and TzTok-Jad himself. It is highly advised to get a full slayer helmet or a focus sight before attempting this task with range. With the boosts from these helmets, effective players with high combat stats can complete the caves in well under an hour, yielding relatively high experience per hour.

The Slayer experience breakdown of a Tzhaar Fight Caves task is:

If a player fails/chooses not to complete the fight cave (successfully defeat TzTok-Jad), they can start the fight caves over to fight lesser creatures to complete the task. The task will end when the player reaches 280 kills. Afterwards, the player can continue progressing through the Fight Caves, but they will no longer receive Slayer xp or the bonuses from the full slayer helmet or the focus sight.

If you are successful in completing all the waves and defeating TzTok-Jad, you will be rewarded with 16,064 Tokkul and the much-coveted and non-tradeable fire cape. This cape has an animated "lava" pattern. The animation shows lava flowing downwards continually.

The Fire cape is widely considered one of the best melee capes in RuneScape. It provides ample protection, prayer, and melee critical bonuses only equalled or surpassed by the Max cape, Completionist cape, and TokHaar-Kal. Numerous other capes, such as trimmed skillcapes, Ardougne cloaks, and most notably the Soul Wars cape, provide higher Prayer bonus.

The Fire cape also gives the ability to obtain an Ice strykewyrm slayer task without using slayer reward points to purchase that ability, and doubles the damage of fire spells while slaying them. In addition, it adds 40 damage to all attacks against them. Ice strykewyrms are the only monster to drop the Staff of light.

Defeating TzTok-Jad subsequently after obtaining the Fire cape awards the player with another Fire cape and 16,064 Tokkul, allowing you to have more than one fire cape at a time. Any spare fire capes can also be sold to TzHaar-Mej-Jal for 8,000 Tokkul per cape.

If a player dies in the fight caves, they will still get Tokkul, but not as much as they would if they defeated TzTok-Jad. The further a player gets, the more Tokkul and if one dies at TzTok-Jad then they will only receive 8,064 Tokkul—about half the amount than if the player defeats TzTok-Jad.

As of 9 November 2009, defeating the Fight Cave and TzTok-Jad rewards the player with double Tokkul.