The Fight Kiln is a combat minigame wherein waves of TokHaar are fought for the sole sake of combat and the TokHaar's amusement. It's a tougher and improved sequel to the TzHaar Fight Cave minigame.

Entering the Fight Kiln requires completion of the The Elder Kiln quest, as well as a one-time payment of a fire cape, which means players would have to complete the TzHaar Fight Cave as well. After this, the kiln may be played as many times as desired for the rewards - a choice of a TokHaar-Kal or an uncut onyx.

Obtaining all unique drops will unlock the title, Kal-Haar-Xil [Name].

The Fight Kiln only has 37 waves, which is fewer than the 63 waves of the Fight Cave. While there is no combat level pattern to be followed for each wave, the waves are always the same between attempts, and the monsters always spawn in the same location. All monsters in the Fight Kiln which have one of the combat styles take halved damage when not attacked with that style's weakness. (E.g. A ranged monster is weak to melee; it takes half damage from ranged and magic.) To reach the end of the minigame, players must fight a total of 7 TokHaar-Jad - who function in much the same way as the standard TzTok-Jad - before being faced with their final challenge; the gigantic Har-Aken.

There are several safespots in the Fight Kiln that can be used to lure and trap the TokHaar. Be aware, however, that the cave will slowly fill with lava, submerging the safespots and forcing the player to use the low wall in the middle of the area for luring. After waves 10, 20, 30 and 34 a cutscene will occur between you and TokHaar-Hok signalling a general change in the combat style of upcoming monsters and the rising of lava around the arena, reducing the available area; By the time the final boss fight with Har-Aken commences, only a small square-shaped piece of land will be available. After your first completion of the Fight Kiln, these cutscenes can be disabled by Right-clicking the Kiln's Entrance and selecting Toggle cutscenes to save time.

Every alternate wave will also cause lava crystals to spawn in the Kiln, which can be used to gain bonuses such as temporary invincibility or full prayer and life point restoration. Use them to the fullest to survive the waves - especially the 7 TokHaar-Jads and Har-Aken.

Unlike the Fight Cave, players are allowed to bring a familiar into the arena. Players can save their progress by logging out between waves and will be able to resume progress when logging back in.

The entrance to the Fight Kiln

In some waves you can obtain lava crystals, which grant certain "power-ups" usable only in the Fight Kiln. Only one crystal can be activated at a time, so the effects cannot be combined. When a crystal is used, the appropriate stat is boosted to 150% (148 at 99) while the other combat stats are reduced to 50% (49 at 99).

It is recommended to pick up the following crystals: Invulnerability, Constitution and Restoration. Others will just occupy inventory space and are NOT needed throughout the fight.


Invulnerability crystal should be used on wave 36. One Constitution crystal is recommended to save for Har-Aken and restoration crystals are useful whenever your life points and prayers are low. 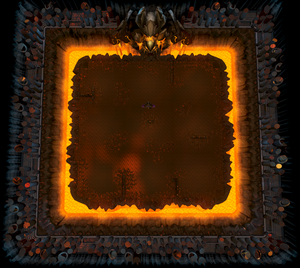 An overhead view of the Kiln arena.

A TokHaar-Kal-Ket, one of the three capes awarded from completing the Fight Kiln

Upon victory in the Fight Kiln, players are prompted to choose reward between a TokHaar cape—a TokHaar-Kal-Ket, TokHaar-Kal-Xil, or TokHaar-Kal-Mej—or an uncut onyx. Players are only able to choose the cape(s) equivalent to the combat style(s) they used most during the minigame. For example, if someone primarily uses melee, they will only get a choice between a TokHaar-Kal-Ket and an onyx, but if someone uses all three combat styles in roughly equivalent amounts, they will have a choice between all three capes and an onyx. It's also possible to have a choice of two capes and an onyx if two styles were used roughly the same amount over the third style.

The TokHaar-Kal capes are some of the best in the game, possessing a damage bonus of 33 in their respective combat styles.

The kiln can be played multiple times to get all four rewards. Completing the Kiln once is also a requirement for the completionist cape. Players may also choose to trade in a set of all three TokHaar-Kal with TzHaar-Mej-Jeh in the central plaza to receive the Enhanced Fire Cape cosmetic override. This will destroy all three capes and is irreversible. Unlocking the enhanced fire cape override is a requirement for the master quest cape.

If a player has a full inventory while choosing a reward, or clicks away from the reward chatbox, they will be transported outside of the Fight Kiln and will have to go back in and talk to TokHaar-Hok again to claim their reward (provided at least 1 free inventory slot is available). The Fight Kiln cannot be played again until a reward is chosen.

Har-Aken may rarely drop the Volcanic shard, which is used to unlock its pet version: Shrimpy.

Tokkul is not awarded during the Fight Kiln, unlike in the TzHaar Fight Cave.