From the RuneScape Wiki, the wiki for all things RuneScape
Jump to: navigation, search
The Old School RuneScape Wiki also has an article on: osrsw:Bree
Loading...
GWDTuska Comes 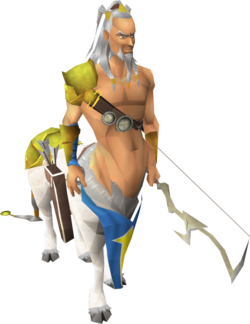 Bree is the centaur bodyguard of Commander Zilyana, commander of Saradomin's Encampment, along with Growler and Starlight. He uses ranged attacks and has a maximum hit of 365 damage.

During the Gielinorian God Wars, Bree lived in the Enchanted Valley with his mate Fern, along with all other centaurs, where they lived in prosperity. At one point, however, the god of order, Saradomin, arrived to the plane to recruit the centaurs to fight for him. They joined him, with Bree and Fern becoming his generals.[1]

Further into the wars, however, most of the centaurs had been killed in battle. Bree wanted to abandon Saradomin and return to the Enchanted Valley with the remaining centaurs, but Fern dismissed the idea and insisted on continuing the fight; Bree accepted, but only because he loved her.[2] Soon, nearly all of the centaurs had been slaughtered, causing the race to almost go extinct. Fern asked her sister, Elora the Lifegiver, to resurrect fallen centaurs, but they were killed all over again.[3] Eventually, Elora died of exhaustion, having never refused to fulfil any of Fern's requests. In remorse and despair, Fern removed Elora's horn from her head and used it as a wand to revive the dead centaurs, but they returned as zombies, because only the truly virtuous can use a centaur's horn.[4]

The undead centaurs mindlessly killed their own brethren, saving Fern for last. In her remorse, she became a spiritual guardian of the horn, the Wand of Resurrection, to guard it in the Tomb of the Fallen.[5]

Bree, however, had not been slain. He had been stationed in the Temple of Lost Ancients to serve as a bodyguard for Commander Zilyana, who had been sent by Saradomin to serve as allied reinforcements after a flock of aviantese had been ambushed by Zamorakian demons. Bree and the others fought valiantly for Saradomin's cause, but Zilyana ordered a retreat after Growler was severely injured in the fighting. The icyene then prayed for Saradomin's aid, who responded in the form of three amulets bearing the symbols of Armadyl, Bandos and Zamorak. Zilyana initially destroyed the first batch, believing a heretic to have placed it in there, but when they appeared again the next day, realised Saradomin had sent them, although confused by her purpose.

Following the second appearance of the amulets, Zilyana asked her bodyguards to wear the amulets. Bree took the amulet bearing Armadyl's icon, feeling a strange power from his bow when he wore it. Eleven days after he wore the amulet, Bree decided to lead a small expedition force to the battlefield to see how the battle was faring. This was a near disaster, as Bree and his men were nearly overwhelmed. Sensing this, Zilyana mulled Bree to return over and over. Within the hour, he returned, telling Zilyana that he felt as if she was calling for him.

A powerful spell cast by Aeternam, a Guthixian mage, froze the entire dungeon beneath the temple, leaving Bree trapped in time, as one of the last centaurs alive.

He represented Saradomin in the third world event.