From the RuneScape Wiki, the wiki for all things RuneScape
Jump to navigation Jump to search
This article is about the race as a whole. For the npc, see Centaur. 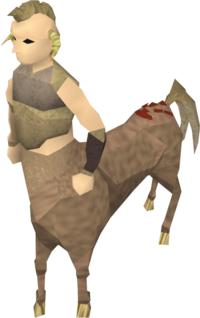 Centaurs are creatures with the torso a human and the legs of a unicorn. In very rare cases, they may grow a horn similar to a unicorn.

Centaurs were populous in the Enchanted Valley up until the Gielinorian God Wars when nearly all followed Saradomin to battle in Gielnor. Bree and Fern were the generals of the centaur army at the time. As the war dragged on, the centaurs suffered heavy casualties and Bree lobbied to abandon Saradomin and return to the Enchanted Valley. Fern disagreed and continued the fight. In order to avoid a near-certain extinction, Fern convinced her elder sister Elora to join them in Gielnor and resurrect their fallen comrades. Eventually the workload took its toll and Elora died. In desperation, Fern took Elora's Wand, the source of her magic, and used it to resurrect the fallen herself. However, Fern was not pure of heart enough to wield the wand without consequences. The resurrected were corrupted versions of centaurs, undead and deadly. The corrupted centaurs slaughtered the remaining centaur armies including Fern herself.

Today, there are only a few hundred centaurs left, but few willingly show themselves to outsiders. To stave off their extinction, one of the first acts Saradomin performed upon returning in the Sixth Age was to task Sir Owen and the World Guardian to retrieve the wand in The Death of Chivalry. However, the plan went awry when Saradomin revived Owen as a corrupted human. Seeing his mistake, he cautiously ordered Owen to prepare for the journey to the centaur burial grounds, leaving the fate of the race on hold for the time being.

Wikipedia also has an article on: wikipedia:Centaur (race)
Retrieved from ‘https://runescape.wiki/w/Centaur_(race)?oldid=35251564’
Category: