The special attack is more useful for emergency heal situations and can heal a lot of life points instantly, especially if used under damage boosting abilities such as Berserk. The passive effect heals more consistently and has a comparable life points restore but substantially better prayer points restore. The passive effect can activate on both auto-attacks and abilities. However, for players with access to superior weaponry (such as drygore weaponry) who do not wish to use a level 75 weapon (which is required in order to benefit from the passive effect), the special attack is preferable. 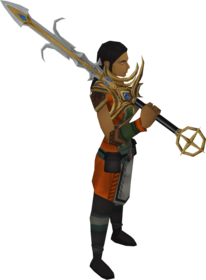