Orks are stocky, green-skinned humanoids and some of the most prominent soldiers in Bandos' former armies. They have large tusks protruding from their jaws, and prefer to use large axes or maces in battle.

Orks can be found in the God Wars Dungeon as a part of Bandos' army. These orks are notable to be reliable soldiers as they can deal moderately high damage. Players should also be aware that killing an ork will result in other nearby orks to become aggressive and target the player. Dealing damage to an ork that is eventually slain by other monsters will also result in nearby orks to target the player.

Orks existed in the beta of RuneScape 2 before the official release. There existed one orc in the Gnome Maze, but it was removed on 31 January 2005 with the Creature of Fenkenstrain update.

Undead versions of the orks, known as revenant orks, can be found in the Forinthry Dungeon. They are the ghosts of orks that were slain in the God Wars. They are much more powerful than their combat level suggests, being able to hit hard and perform surprising tricks (see the article for more information).

An ork can also be found in the Balthazar Beauregard's Big Top Bonanza as a target of levitation spells. This suggests they are not yet extinct. Also, it is said that the people who count up the Poll Results on the RuneScape Website are called Poll Orks.[1]

Despite their high combat level, orks only drop low level combat equipment such as bronze equipment, iron equipment, and occasionally steel equipment. However, they can drop easy and hard clue scrolls. 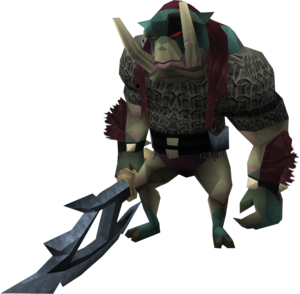