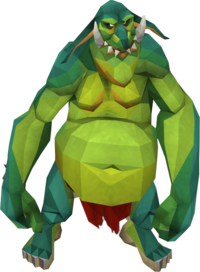 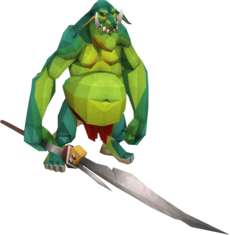 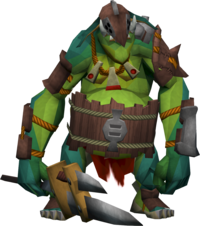 Hobgoblins are Bandosian creatures that share characteristics with both goblins and orks. They can be aggressive to lower-level players, especially when several are in the area. Generally, only Level 32 and level 35 hobgoblins wield spears.

Players may find that they are good monsters to train on, mainly because they give decent free-to-play drops for a low-level creature. The Edgeville Dungeon is a popular location for free-to-play players to find Hobgoblins. They also reside in the God Wars Dungeon. When killed there they will add to the killcount for Bandos. Hobgoblins are often found in areas near water such as peninsulas, in caves, and in areas that contain Limpwurt root spawns. They will also drop these roots, making fighting them a good way to obtain them.

In the quest Fur 'n Seek, hobgoblin skin must be collected and cleaned for the Odd Old Man.

Hobgoblins are said to be similar to a cross between goblins and orks[1], which were brought with the other Bandosian races from Yu'Biusk in the Second Age. As such, they possess characteristics of both races, possessing the pointed ears and height of the goblins, in addition to the tusks and physique of the orks.

While not as tenacious as goblins or as strong as orks, hobgoblins have strength that exceeds that of a goblin significantly and are agile, mobile guerrilla units[2] in battle unlike lumbering orks and ogres, making them a good all-round fighter.

Despite being smaller compared to most of Bandos' other followers, hobgoblins are intelligent enough to maintain cohesion among themselves; following Bandos' banishment from Gielinor, the hobgoblins continued his ways, waiting for his return.

Hobgoblins are one of the 'races' who have a champion in the Champion's Challenge Distraction and Diversion. To fight the Hobgoblin Champion, the player must kill hobgoblins until one drops a Champion's scroll, a very rare drop.