The Zamorak godsword (passive) is created by using an Zamorak godsword on the Zamorak altar in K'ril Tsutsaroth's room. This process can be repeated to turn the sword back to normal. The passive effect replaces the special attack and also renders the sword untradeable.

The passive is perhaps more useful when trying to keep an enemy frozen for as much time as possible, for example when countering rangers who farcast using the Binding shot ability. The special is more useful when the bind need to be at an exact time and/or coupled with a strong hit, such as preventing a flag carrier from running away in Castle Wars or someone from running away in the wilderness, or if Barge is on cooldown. A freeze for melee is more useful than it sounds since a melee user cannot use any abilities on a fleeing target, attempting to do so causes the game to state that the target is too far away regardless of the actual distance to the target. 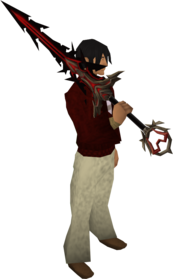 The update history project is a work-in-progress – not all updates to this topic may be covered below. See here for how to help out!
Retrieved from ‘https://runescape.wiki/w/Zamorak_godsword_(passive)?oldid=33937465’
Categories:
Hidden categories: