Wizard Chambers is an astromancer that can be found on the bridge connecting Lumbridge swamp to Al Kharid, and on Tuska's corpse where he hosts the Anima Islands Distraction and Diversion.

Wizard Chambers was the first to spot Tuska approaching Gielinor, placed a lodestone on Tuska, and provided a guide to the activities in the Tuska Comes world event.

As part of the Mod Deg trading sequence, if a creepy doll is used on him, he will act confused as to why so many people keep showing it to him. If it is activated next to him, he will confiscate it and replace it with Apollo's helmet.

He was previously found on the 2nd floor[UK]3rd floor[US] of the tower, on the balcony with a telescope next to Archmage Sedridor's office. He initially merely said that he was busy when spoken to, but after the event on 24 May 2015, he began speaking about how a huge object was hurtling towards Gielinor, and that it risks shattering the planet into pieces. He is excited at this discovery, because it means his field of research is finally useful, after constant years of mocking by the other wizards.

A week later, he was found behind the tower, and requested that players assist him with testing the trajectory for sending a lodestone into space. Players did this by exploding a barrel and sending a monkey known as Apollo into space as a test flight. He rewarded players who help him with a calibration device. He was often visited by suppliers, who restocked his barrels.

During the event, Wizard Chambers could be found on Tuska's back, helping adventurers begin the assault against Tuska. He was also interested in the Tuska fragments and Meteorite chunks, giving them reward points in exchange for them. Chambers also told them what they could do on her back while the assault was not going on.

As Tuska was hurtling towards Gielinor, Vorago appeared to face her. Chambers teleported out before Vorago killed her, otherwise he would have been killed. After Tuska landed south of the Wizard's Tower, Chambers returned to Tuska's back, demanding that his council be recognised as a legitimate contributor.

Tuska's corpse and can be found west of Bedabin Camp, and can be accessed by clicking the 'Swim' option on one of the two water(s) or by teleporting with Wizard Chambers from the bridge.

After the fall of Tuska, Wizard Chambers can raise the floating islands from the bottom of the sea to allow players to siphon Anima Mundi to earn both experience in numerous skills and Reward Currency. 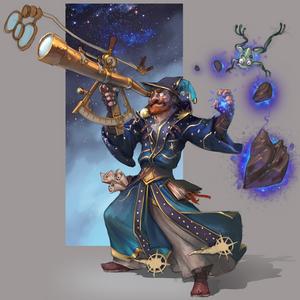