From the RuneScape Wiki, the wiki for all things RuneScape
Jump to navigation Jump to search
This article is about the Distraction & Diversion. For the related world event from which it originated, see Tuska Comes.

Anima Islands is a members only D&D. Initally part of the Tuska Comes world event, after the fall of Tuska, Wizard Chambers can raise the floating islands from the bottom of the sea to allow players to siphon Anima Mundi to earn both experience in numerous skills and Reward Currency.

It can be played at any time, and it is possible to get up to 1,000 Reward Currency from each game. Experience received is scaled according to level. You can gain components while on the Lost Souls island when using the torch to light the tentacles if your armour or off-hand weapon is equipped with the Scavenging perk.

Deaths on the islands are safe, and Ironman accounts are able to participate in all content and have access to all rewards.

To get to the activity, players must swim from the Desert Bandit Camp or Bedabin Camp to Tuska's corpse, or teleport there by talking to Wizard Chambers located next to the boat to Daemonheim south-east of Lumbridge.

To start a regular game, simply walk through the magical barrier to the starting island. After a moment, all players on the starting island will be sent to the islands together. If players wish to do the event with friends, the Grouping System can be used: create a group, set the group's activity as "Anima islands" in the matchmaking interface, invite other players into it, and then once everyone's status is set to 'ready', talk to Wizard Chambers to start the game.

Players are disallowed to bring any familiar, pet or non-combat item into the game. Moreover, food cannot be brought in despite its function in helping fighting monsters (it is not clearly stated), although potions are allowed. However equipable items with no combat bonus including many skilling outfits and charos' clue carrier can be brought in, and players can bring both equipped and unequipped skilling outfits into the game.

The islands that previously orbited Tuska are now at the bottom of the sea. Wizard Chambers can raise them, allowing players to siphon Anima Mundi; however he cannot do this very long and players will be forced to transfer to another island every 5 minutes.

The amount of energy which may be gathered on an island is limited by which leg of the journey the player is on; i.e. on the 1st island up to 25% can be gathered, up to 50% on the 2nd, and up to 75% on the third island. Upon obtaining all the power one can get on an island a notification appears in the chatbox saying that the player cannot get any more Anima Mundi from that island. The maximum of 100% energy can only be reached on the last island.

The order the islands are played is completely random, and the rate at which energy can be gained varies according to the particular actions the player can perform while on the different islands.

The interface of a fully charged meter 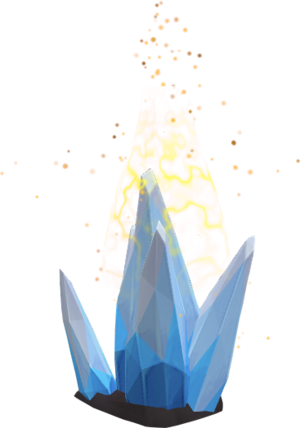 Players will end up on four islands of a clockwise-running agility course. To siphon Anima, they can charge Active runestones in the course to gain Divination experience, which are only visible to certain players. To move from island to island, players either balance or climb a blue crystal (Agility experience) or chip off a gatestone embedded on one of the islands (Dungeoneering experience).

Once every 30 seconds, a random player will be selected to hold a gatestone; players can teleport to them by hitting the teleport option provided in the bar above. This can be helpful for skipping obstacles or transferring to an island with an active node. If a player is alone, this function is unavailable. Teleporting also gives a small amount of dungeoneering experience. 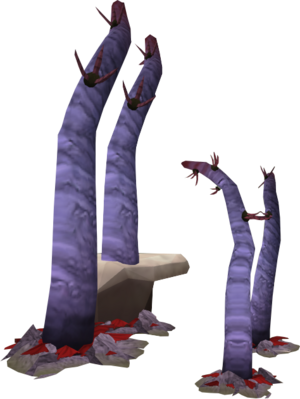 Players will end up on an island seemingly having been influenced by one of the younger gods. There are two main tentacles on the main island (one if less than three players); they cannot be attacked, but spawn lesser corrupted growths which can be attacked. To hurt the corrupted growths, players must go to the Holy fire and equip the torch received to deal damage onto them. The fire only lasts 30 seconds, so players will need to return to replenish the fire. The area directly hit with the fire will be dealt with 500 damage, while the area around it in a 3x3 radius will be hit for 250 damage. Constant Firemaking experience is gained while attacking tentacles, regardless of the number of corrupted growths burned. During the last minute available on the platform, the Holy fire will provide about 60 seconds of fire. The lesser tentacles do not have infinite spawns. 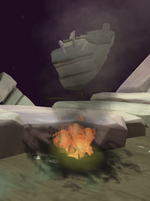 Best way to pass this land: get a torch and light the tentacles. It doesn't matter how many are burned at once, so go for the ones closest to the fire. Using the Scavenging perk on either armour or an off-hand weapon will sometimes award components after a tentacle has been destroyed. 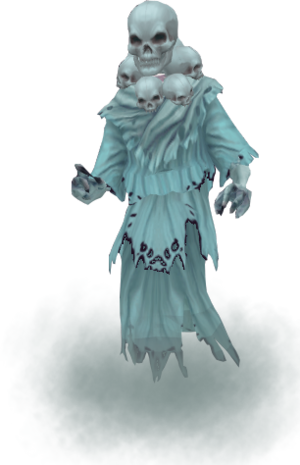 Alternatively, players may climb down to a graveyard where they can search the altar for a Relic of Life. This tool is required to enter the underworld. Digging a grave will result in the player entering the underworld, revealing one Lost Soul (this soul shows up as orange) to be captured, and many Tormented souls on the main island to be released. Capturing a lost soul charges the Relic of Life. Releasing a tormented soul returns the player and the soul to the normal world. To free a lost soul, return to the normal world with a charged relic and interact with the altar. To free a tormented soul, kill it to possess the spirit and bring it to the Last Rites circle. Anyone that attacks the tormented soul will turn into one upon its death. After entering the Last Rites circle, the player will be changed back to human form.

Capturing and freeing the lost soul gives Divination experience, while fighting and guiding a tormented soul gives Prayer experience; both can be done in one trip to the underworld, giving 6% energy each time.

Returning eight lost souls is one method to max out the player's contribution for this island. 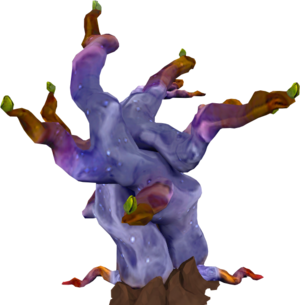 The core plant of the island

Players will end up on another island with a tree in the middle. Several large tentacles appear that surround the island, but will not cause any harm. Woodcuttable vines, and attackable tentacles randomly appear on this island. To proceed, players kill the tentacles or chop the vines, gaining mysterious herbs in the process. The herbs must be ground into powder, which can be used to nurture the roots to grow them. Each step in a root's growth requires a number of crushed herbs equal to the number of players that were initially part of the group. When a root reaches one of the pods surrounding the tree, it will turn into a flower which can be collected for a vibrating seed. The seed should then be used on the core plant to release the Anima Mundi, with each seed contributing about 6% charge. The flowers also have roots which will lead to other pods. Vines and tentacles can block the path towards a pod and must be chopped down or killed to proceed further. If multiple players chop the same section of vine, each player will receive a number of herbs equal to however many players were chopping that section upon clearing it; likewise, each player who inflicted damage to a tentacle will receive one herb as it dies.

Roots can be nurtured cooperatively by multiple players, and when any pod blooms, all players can collect the seed from it. Using a seed on the core plant provides a significant amount of Anima Mundi, so it is recommended to prioritise any root that is closest to a pod.

Returning three or four energy seeds to the central tree is one method to max out the player's contribution for this island.

Best way to pass this land: chop the vines and grow the roots. Collect the seeds as soon as they are available. 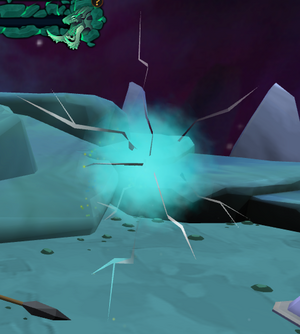 Players will end up on an island that attracts lightning. They can construct pylons from the shattered pylon hotspots (for Construction experience), which will attract a sentient lightning that can be lured to the Unstable Core in the middle of the island (for Hunter experience). The pylon will shatter after a Sentient Lightning is attracted to it, which happens on the third lightning strike. More than one Sentient Lightning can be lured at a time.

Alternatively, players can build lightning traps upon the targets that randomly appear on the ground. After a short while lightning will strike this spot, charging the trap and releasing it to the core (for Hunter experience).

In addition, tiny balls of living lightning will appear and may be attacked. Killing the lightning, or being near enough when a Sentient Lightning reaches the core, electrifies the player with a residual charge that should be brought to the Unstable Core for points. There is a specific amount of time before the charge fades, shown as a bar above the player.

Constructing pylons non-stop while luring a sentient lightning to the unstable core is one method to max out the player's contribution for this island.

Best way to pass this land: constructing pylons. If solo, ignore the Sentient Lightning while placing only the traps which aren't out of the way. Otherwise, make sure to keep close enough to the core to receive residual charges. Alternatively, ignore everything except constructing pylons for maximum construction experience and anima.

If you teleport out of the minigame before the 20 minutes has elapsed, you will not gain any reward currency.

Right clicking on Wizard Chambers will provide an option to open the reward shop interface. The following rewards are available:

The following titles can be unlocked randomly by participating in the D&D: