From the RuneScape Wiki, the wiki for all things RuneScape
Jump to: navigation, search
The Old School RuneScape Wiki also has an article on: osrsw:Gorak 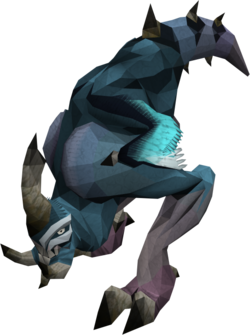 Goraks are a race from the Gorak plane, a separate dimension from Gielinor. The Gorak Plane can only be accessed via fairy ring code dir). Goraks can also be found in the God Wars Dungeon. They are encountered during and after the A Fairy Tale II - Cure a Queen quest, where the player must obtain their claws to create a magic essence potion.

The Goraks constantly draw the life essence from any living being they encounter, as well as the world they live on. In doing so, they have effectively trapped themselves on small plane, leaving what remains of it noticeably warped. At some point, they chose the god who showed them battle, who happens to be Zamorak.

Goraks can be assigned as Slayer tasks in numbers of 40-80, by Duradel or Lapalok. Goraks will not be assigned as a task unless the player has access to fairy rings from A Fairy Tale II - Cure a Queen.

Goraks mainly attack with a typeless melee attack, and every damaging hit will lower a random skill by at least one level, including noncombat skills, but excluding Constitution. It is recommended to bring a few Super restores to replenish drained stats as necessary.

Lower-levelled players should be cautious, however players with at least level 80 stats should have little trouble killing large quantities, particularly if using magic.

Because their attacks deal typeless damage, protection prayers and deflect curses will have no effect. However, all other prayers and curses can be used normally. The accuracy is calculated against the player's melee defence, so magic armour will provide the best protection.

When fighting Goraks in the Gorak plane using range or magic, it is very easy to move around the fairy ring using it as a safe spot for the Goraks that spawn nearby. 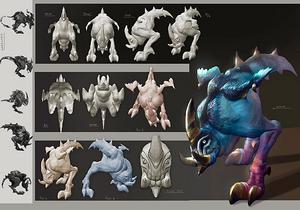